The story that had started 1931 years ago 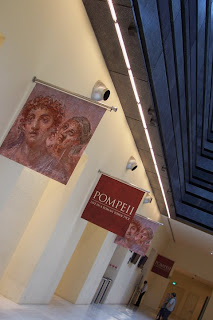 Time winds back to 1931 years ago,the volcano Mount Vesuvius erupted on 24 August 79 CE. This event destroyed and completely buried a number of the nearby Roman towns, including Pompeii.

Destroyed and completed buried, we would have thought that Pompeii would be forgotten forever. However, that was not the case. The effects of the volcanic eruptions that had destroyed Pompeii in 79 CE  had ironically preserved Pompeii for centuries. The buried towns were only rediscovered in the 18th century. 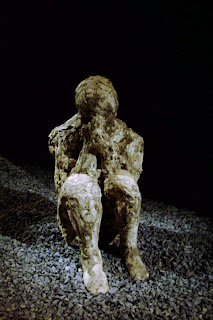 From this exhibition, I learnt that the people of Pompeii adore their gardens. What have stuck in my mind were: Pompeii, Mount Vesuvius, Plinian eruptions, frescoes, gardens, volcanic ashes and carbonised food. If I put them together, these themes do tell a story.

My favourite sections of the exhibition were: Pliny's Eyewitness Account, the film titled "The Final Hours", garden, volcanology, the documentary titled "The Next Pompeii?", Archaelogy and Reference, and the Children's interactive space. I also like the multimedia station that allowed me to make a virtual tour of the specific sites in the unearthed city of Pompeii.

There is a very good coverage of this exhibition on Yesterday.sg. Please read Pompeii: Life in a Roman Town 79 CE Media Preview.

A visit to a museum can often be inspiring. After my visit to the exhibition, I have an urge to visit the unearthed Roman town of Pompeii some day in my lifetime. May this wish be realised soon.

Pompeii: Life in a Roman Town 79CE
Presented by National Museum of Singapore and organised by Soprintendenza Speciale per i beni Archelologici di Napoli e Pompei and Melbourne Museum.

u mean the town was buried? Any survivors?

Pinkie: Yes, the town of Pompeii was buried as a result of a volcano eruption.

I watched a short sequence of a video at the exhibition and it seems like whoever had managed to leave the affected areas before the second stage of the volcanic eruption had started were likely to leave alive.

By the way, for free admission, wait for the Open House of the museum.

There's definitely one on Christmas Day. The next that is coming up is on Deepavali.

thanks for sharing the review, not sure how the exhibition was going to be like and decided to do a lil search online, and after reading, i personally can't wait to check it out! read about pompeii in the textbook when i was young(er), and it left such an impression that it was one place i wanted to visit all my life, and i did make that very special trip but didn't manage to head to the museum in naples. and i hope this will kinda make up for it :)

Superb post with some very valuable info. Keep it up the good work

I visited the Pompeii exhibition too! I think it was cool! For those people who are not able to go, I suggest you visit the virtual tour of the event here: http://bit.ly/SingaporePompeii