A tour about Chinatown with RL 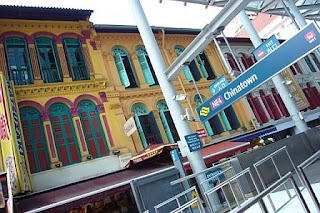 
Many thanks to my friend, RL, for setting aside time to meet up with me while she's back in Singapore. She has been a lovely company to check out some parts of Chinatown with me. I felt a sense of nostalgia visiting Chinatown and touring it like a tourist.

Our meeting point was at Chinatown MRT station. After we left the station, RL showed me where one could get interesting fashion wear in Chinatown. There were quite a lot of things that I had learnt from my lovely companion and friend that day.

On our way to a hawker centre to try local food, we passed by Sri Mariamman Temple, which is one of the oldest Hindu temples in Singapore. I suggested visiting the temple so as to have an appreciation of how a Hindu temple would look like. The truth was that I have already visited that temple many times. I had thought it might be an interesting exposure for RL to visit a Hindu temple for a while. I now keep my fingers crossed that I did not come across as an overly zealous tour-companion. Hopefully the visit did not leave my dear companion with headaches and cries. Whatever it was, I was doing my best to point out to her parts of Singapore that she might have otherwise overlooked. Our stop for good hawker food was the Maxwell Food Centre. Patricia Schultz wrote in the book 1000 places to see before you die - A traveller's Life list that one of the places that one must see is the hawker centre in Singapore. Good food at reasonable prices. Different cuisines are available from one single hawker centre. A visit to a hawker centre is definitely a "gastronomic and cultural experience". 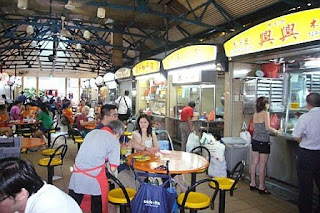 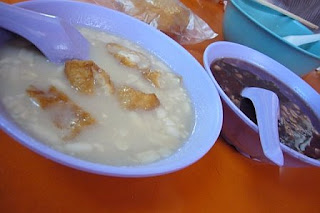 
RL generously gave me treats to peanut soup, red bean brown rice soup, watermelon juice, vegetables and bee-hoon soup. I was very well-fed with great food that afternoon. Many thanks to RL for her treats, though she needn't have. 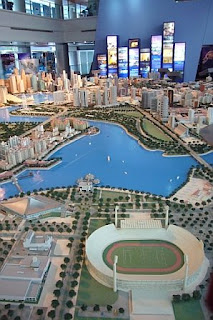 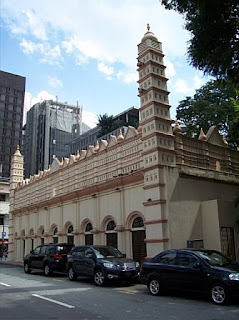 That afternoon, we walked along a section of Amoy Street and then walk towards the part of Telok Ayer Street that was where Far East Square stood. We came across a traditional Chinese pastry shop, Tan Hock Seng. I have learnt from RL about a kind of sweet that was made from glutinous rice. I tried some of it, and it was yummy. I wish that Tan Hock Seng will continue to enjoy good business so that it will stay strong and steady many decades later. Otherwise traditional pastry shops like Tan Hock Seng may one day become a part of history only.


We also made a short visit at Fuk Tak Chi Temple. This site first began as a temple for the Cantonese and Hakka immigrants. They installed a shrine of the deity Tua Peh Kong at the current site of Fuk Tak Chi Temple sometime between 1820 and 1824. Subsequently, the site underwent a series of changes. It was later redeveloped into a street museum and re-opened to public on 19 November 1998 (View source: Singapore infopedia). 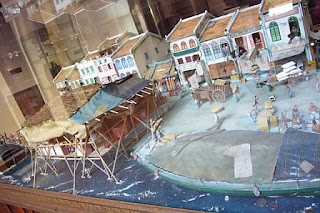 
After walking kilometres and kilometres, we treated ourselves to beverages at The Coffee Bean & Tea Leaf. If I could drink cold beverages without a single care, and if I could tolerate the caffeine from coffee (without ending up with sleepless nights), I might have been sold to RL's recommendations and become a fan of one of her favourite beverages, the Coffee Bean & Tea Leaf's Ultimate Ice Blended. Anyway, I had double hot chocolate with marshmallow instead. I have learnt that I should have chosen the small-size version and not the regular-size version. Nevertheless, in whatever outings and meet-ups, it was the company that matters most, not the food.

I thank RL for her friendship and her most appreciated company that day. Meeting up with her has helped me get in touch with my love for exploring places in Singapore. It's lovely to find peers who find pleasure in exploring Singapore. I am thankful to RL for her kind patience and understanding when I had to attend to a couple of phone calls and texted-messages while we were exploring the Chinatown. She also kindly lent me a listening ear, when I needed to remind myself to stay composed and calm to handle a particular situation more effectively. Thanks RL.

you make an excellent guide.
one day your services will be sought after, professionally. *wink*

PY, do you find it ironic?

The heart of Chinatown today does not sound Chinese at all. Smith, Temple, Pagoda, Trengganu, Mosque - which of them are street names with Chinese background? There is no Chinese temple there, so our Temple Street is unlike the one in Hong Kong. Pagoda actually refers to the pagoda of the Indian temple in your blog, not Chinese pagoda.

This is weird 'cos the street names in Kampong Glam and Little India makes sense to their respective communities.

Misti: Thank you Misti for your compliments. :)

2ndshot: Thank you for your comments. I don't find it ironic. I just see it as an example that a multi-racial society has already formed in Singapore way back during the colonial times.

Yes, I am aware that the name of Pagoda street refers to the pagoda of the Indian temple.

Yeah, I enjoyed hawker food every time I go to Singapore. I particularly like the hawker centre at Tanjung Pagar.

Doreen: Hmmm...was it the hawker centre at Tanjong Pagar complex? I remember one of the stalls sell nice ice kachang with lots of serving of peanuts, and another sells Japanese food at very affordable prices.

Emm....not sure if you're refering to the one I been to. It is opposite Amara hotel.

Doreen: Most likely, you were referring to the hawker centre at Tanjong Pagar Complex. It looks like many HDB flats grouped together?