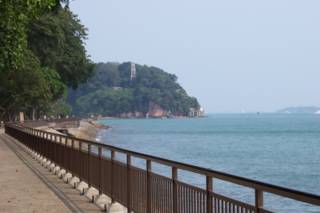 I must report that the weather today has not been an ideal one. The air has been looking smoky since this morning. I was hoping for a more picture-perfect weather, but it did not happen. Anyway, I decided to visit Labrador Park today in the afternoon despite the poor weather condition. It was not raining, but the skies certainly looked dull and the air was smoky-looking.

Here is a piece of good news for the folks who wish to visit the Labrador Park, Singapore. There is a new bus service that goes direct to Labrdor Park, and it is commencing starting today! This bus service is Service 408 operated by the SBS Transit. It operates on Saturdays, Sundays and Public Holidays, from 9 a.m. to 7 p.m. The bus service shuttles between Harbour Front Interchange and Labrador Park. There is a flat fare of $1.00 trip. I personally think it was worth it. Labrador Park is quite a long distance away from the main traffic. For someone like me who do not own a car and do not drive, I would either have to hire a taxi (cab) or to walk by foot about 10 - 15 min in order to reach Labrador Park. I find taking the bus service an affordable and alternative to hiring a taxi.

To provide my mind with information about the history of the Labrador Park, I purchased the book titled Labrador Park: The Adventure Begins by David Lim Kee Ann and Esmund Chua. I was fortunate to get my book autographed by both the authors. I have managed to browse through some of it, and I would recommend it as a good buy for the layman (I consider myself one of them) who wishes to know more about the history of the Labrador Park. Some of the information about the Labrador Tunnels that you would see on this post are extracted from the book. So if you enjoy the information that was offered on this post, it is likely that you would like the book too.

The main purpose of my trip was to visit the Labrador Tunnels, and my trip would not be complete if I had not visited it. As such, the very next thing that I did at Labrador Park after purchasing the book was to register myself for the guided tour to the Labrador Tunnels. I understand that admission (inclusive of the guided tour) is charged at $8.40 per adult. However, there is a promotion period right now where one would only need to pay half the usual admission rates. It is quite a good bargain, so I urge those history-inclined folks to seriously give this a consideration. 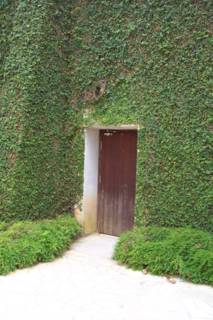 The entrance leading to one of the rooms of the casemate.

During the tour, we were first led by the tour guide to visit the casemate. The casemate served as an ammunition store for the guns. The casemate had four rooms. One of the rooms held the entrance to a tunnel that led to underground storerooms. If I am not wrong, that room which led to the underground storerooms suffered bombings twice. Once by the Japanese soldiers and the other time by the departing British troops in an attempt to prevent their enemy, the Japanese, from getting the ammunition stored there.

I very much like the concept of keeping that particular room of the casemate preserved in the very way it was when it was first discovered after the World War II, after it had suffered the two severe bombings. Basically, most of the rubbles and debris were left untouched. A pathway was cleared of the debris so as to make it safe for visitors to walk through the tunnel, and that was all. 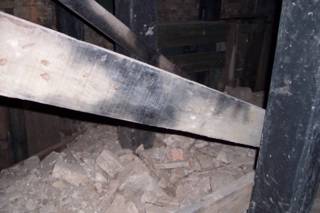 One of the rooms of the casemate. This room is filled with debris as seen on the photo.

After visiting the casemate, we were led to visit another tunnel which was a fair distance away from the casemate. This tunnel lead to another underground storeroom. The storeroom was constructed to serve the Gun Emplacement Three in Labrador Park. A gun emplacement is a platform specially prepared to support large heavy guns and artillery. I got to have an idea how a cartridge store room, a lighting room, and a shell lift area would look like. It was a rather fascinating experience for me.

After the guided tour, I walked about the Labrador Park on my own. The difficulty in finding good company and my preference for quiet time alone could have led me to build up a sense of independence such that I was happy to travel about places even if I was alone by myself.

During the course of my journey alone, I walked past a gun emplacement. It was not new to me. I had attended the "Battlefield Tour" operated by the Original Singapore Walks, and I have learnt quite a bit about the history of Labrador Park and the Pasir Panjang Fort throught that tour which I had attended about a year ago. I would still prefer the tour by the Original Singapore Walks for I find the contents of the tour more thoroughly researched and well compiled as compared to the guided tour of the Labrador Tunnels that I have just attended today.

Aside from the gun emplacement, I also travelled to the Labrador Jetty. In addition, I managed to catch sights of the rocky beaches of the Labrador Park. I also tried to thrill myself by climbing up the aerial staircase that led one from the foot of the hill to the top of it. One can get a reasonably good view overlooking the jetty and the promenade while walking on the aerial staircase. It was nice to walk about Labrador Park, I felt I was close to Nature for the afternoon.

So if you would like to combine the appreciation of heritage with that of Nature, Labrador Park is a rather good choice, I would think.

Finally, here's some information about the Labrador Secret Tunnel. It opens from 10 a.m to 7 p.m. daily. The last entry is at 6 p.m. Admission to Labrador Park is free, though the admission charges to the Labrador Tunnels is at $8.40 per adult.