This global festival aims to realize two main objectives:
1) To provide a unique platform for the world's most talented youth choirs, bands and orchestra to perform in Vienna's magnificent Musikverein
2) To set new standards in the festival arena.

The SCL Festival Opening Ceremony was held at St. Stephen's Cathedral on 6 July 2013. The Cathedral is the most important religious building in Vienna and is a symbol of Austrian identity. The Cathedral is built of limestone. I learnt that this cathedral bears witness to countless historical events in Vienna and Austria. I was personally mesmerised by its Gothic and Romanesque architecture.

Before the start of the Festival Opening Ceremony, our orchestra explored the nearby areas of the cathedral. We saw participants from other participating groups. One of the groups from South Africa was singing in high spirits outside the cathedral. I was impressed by the group's unity and high morale. Everyone was carrying a flat in their hands. 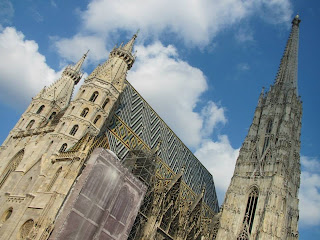 When the Festival Opening Ceremony was about to start, all the participants were ushered into the cathedral. Members of the public who had wished to witness the ceremony could do so by entering via the main entrance of the cathedral.

After the Festival Opening Ceremony, we travelled to Vienna's City Hall to have dinner at Wiener Rathauskeller. This place is known for serving Vienna cuisine. We met participants from the other participating groups at Wiener Rathauskeller. The organisers have been thoughtful to welcome all the participants with an opening ceremony followed by a dinner. Admittedly, I was a little more on the reserved end and interacted very minimally with participants from other groups. Thankfully, this sense of reservation seemed to ease a bit towards the end of the festival.

Interestingly, because it was summer in Vienna in July 2013, the skies looked bright even after we finished our dinner at 7 p.m. I took time to appreciate the wonders of having a late sunset. There was no sunset yet! There skies are clearly bright! Dinner and the earlier opening ceremony seemed to have lifted everyone's moods. Everyone appeared excited for the rest of the festival that would come. Our orchestra took a joint group photograph with participating members of the Singapore Management University Symphonia. 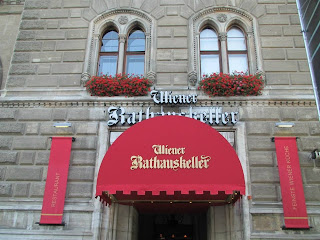 Before we knew it, we were reminded that it was time to travel back to the hotel. There was a rehearsal that evening when we were back in the hotel.


Many thanks to the organisers of the festival for a memorable and meaningful festival opening ceremony.