My room-mate and I decided to join one of our friends, who have travelled from another part of Europe to support us, to explore the area. We saw many cyclists on the road that day. I wondered what the occasion was. It was lovely to feel safe to cycle on the streets of Vienna. The streets of Vienna seem to encourage cycling. Cycling is far more affordable and environmentally friendly than driving cars! I wonder how long it would take for Singapore to create a special lane for cyclists? 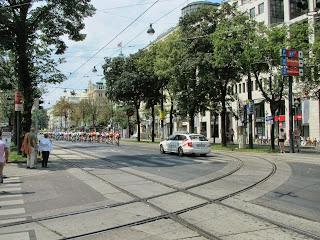 After taking part in the Festival Competition, I decided to free myself from the dietary restriction of eating ice-cream. While I have a liking for delicious ice-cream, I would usually make a conscious effort to cut down on my intake of ice-cream since my body does not respond well to cold food and drinks. Then again, the ice-cream in Vienna was just too affordable for its quality to miss. For 2.20 Euros (about S$3.70), I was able to enjoy two scoops of quality ice-cream served in a delicious waffle cone! It is feasible to buy myself some happiness while I was in Vienna. 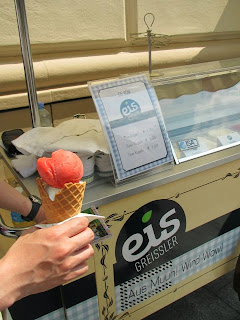 While exploring the areas near Wiener Musikverein, it totally slipped my mind that a friend had told me that if I had wanted to get myself a double bass bow, I could check out the shop at the Musikverein. Maybe this was a sign that I do not need a new double bass as yet? 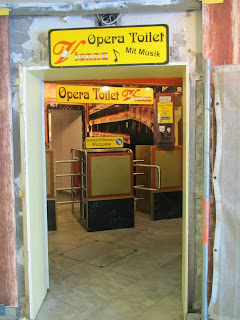 Time passed very fast. Soon, the short break was over. Everyone in the orchestra had to gather and take the bus to MuTh (also known as Musik und Theater). The orchestra was to put up a performance at MuTh that evening. My visit to Vienna would be special and memorable because I would be performing in Vienna!
Posted by oceanskies79 at 10/17/2013 09:43:00 pm