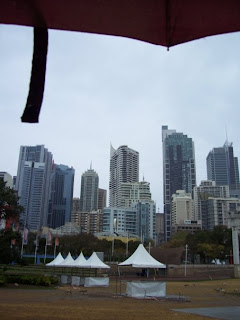 After a short stop at Paddy's Market (Haymarket), armed with an umbrella in my hands, I headed towards Darling Harbour. The morning skies looked pretty peaceful. There was slight drizzle by that time of the day, yet there was a sense of adventure being able to walk in the rain, with an umbrella to shelter myself of course. The city of Sydney somehow looked so peaceful when I stepped away from the heart of its busy activities. 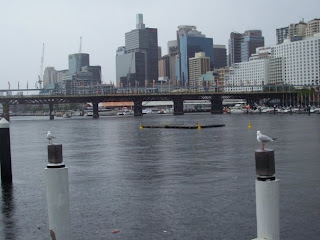 Cockle Bay. The bridge in the background is Pyrmont Bridge.

I was travelling on my own, and enjoying the experience of travelling solo. Finally, I reached Cockle Bay which would eventually lead one to Darling Harbour. Pyrmont Bridge that was nearby provides access for the pedestrians from the city to Darling Harbour. Only after my return from Sydney did I realise that Pyrmont Bridge is a swing bridge. There is a control box in the middle of this bridge that controls the mechanism to let this bridge pivot horizontally to let large vessles enter the inner harbour. How interesting!

There was still a slight drizzle when I reached Cockle Bay, so I ended up in a shopping mall called Harbourside. There was high-speed internet access at $2 per 21 minutes and I used it to access the internet. That was probably my one and only time while I was Australia when I accessed the internet. After realising that I would end up spending time to clear junk mails from my work-related email account, I decided that I would refrain from using the internet. Afterall, I was on holiday.

By 11.40 a.m., the rain had stopped, and it was perfect time to explore Darling Harbour, Cockle Bay and the Pyrmont Bridge. The sights there were simply delightful so I shall simply allow the photos to do the talking here. 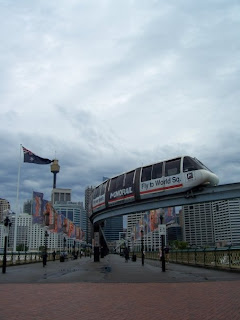 The elevated monorail that travels between Darling Harbour
and the Sydney central business district. 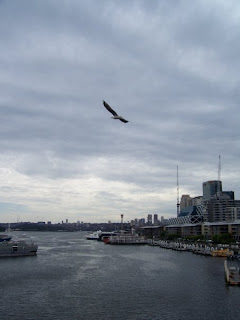 The subject matter here was the soaring seagull. 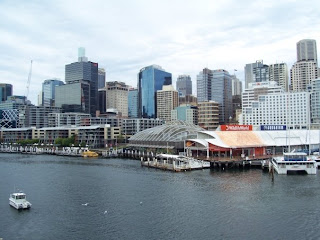 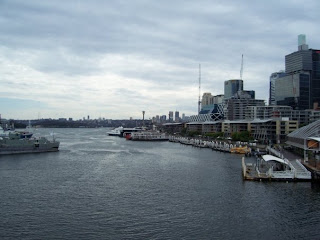 Darling Harbour at the distance. 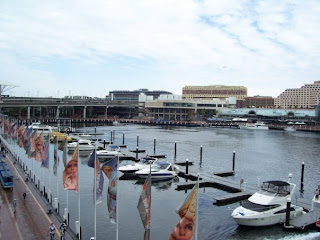 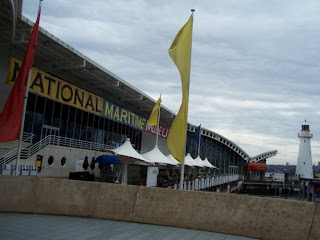 The National Maritime Museum.
My main subject matter here was the light-house. 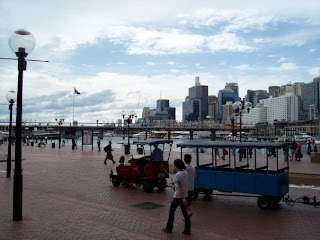 A tram to ride on. 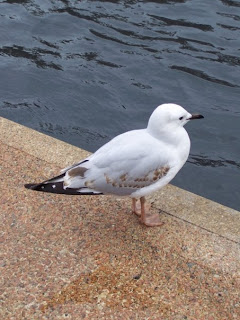 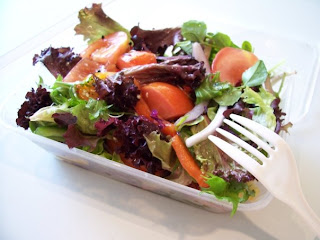 My lunch that day. The lettuce definitely could taste better.

With such lovely sights to delight the senses, my mood was light-hearted. Whatever the weather could be, my moods were independent of it. Enjoying the carefree moments.
Posted by oceanskies79 at 9/29/2008 08:17:00 pm

i wonder what the bird was thinking.

Such lovely sights of Sydney.

You should even think of the internet! I wish I could do that when I go travelling soon. haha....

Misti: What do you think the bird was thinking?

oops... my mistake. You shouldn't even think of the internet when you are on holiday. *hits forehead*

For me, as a blogger, I need the internet and spending that few hours online make me lose precious time to go sight-seeing. I wish I could do without the internet when I travel. :)

eastcoastlife: If you are worried that there's nothing posted on your blog while you are away, using the Blogger's Scheduled Posts function would help. I did so when I was away.

For me, I would use a note-book to write down (manually) my travel logs, then when I return, I would then refer to the notes and write up my blog posts.

Don't know if this strategy would work for you.

i think the bird is admiring the sea and nature, maybe thinking, "my! what a view, and i can fly over the sea. such fresh air. i would not want to turn into a human at any rate."

Lovely pics of Sydney - makes me reminisce about my trip there a few years ago. Cold & rainy there now eh? :-)

Raynebow: I'm too sure. It's spring in Australia now. I am now back in Singapore.