On the evening of 3 Nov 2012, thanks to the kind invitation of a friend, Victor, I joined Siong Leng members and supporters on a trip to Kusu Island.

I learnt that for many years, Siong Leng has been visiting Kusu Island during the 9th lunar month of each year. Kusu island is one of the Southern islands in Singapore. Its name means "Turtle Island" in Chinese. On this island is a well-known Chinese temple, Kusu Tua Pek Kong Temple. I heard that when the Siong Leng members and supporters reached the Chinese temple, they chanted a Buddhist mantra to Tua Pek Kong and the resident deities in the temple. 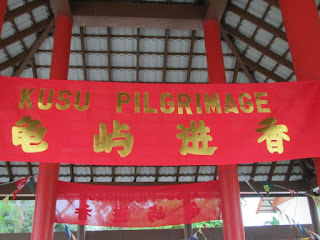 During the trip to Kusu Island, I also ventured to the nearby Kusu Keramat that was up a hill to offer my respect. After the visit to the Keramat, my friends and I explored the beach of Kusu. I felt calmed by the beauty of Nature.

When I was back in the Tua Pek Kong Temple, along with the other visitors, we settled ourselves down to enjoy a simple yet delicious packed vegetarian meal. I had a bowl of green bean soup. The green bean soup which was served by the temple was delicious.

Thereafter, there was a performance dedicated to Tua Pek Kong. It was an informal performance where the performers sang and performed in plain clothes. The music was soothing. The cool evening breeze made it calming to simply listen to the performance and forget about everything else in the world temporarily. Actually, the weather was drizzling much of that evening.


On the whole, it was a memorable trip, with soothing music, and thoughtful company. I felt thankful to join Siong Leng in its pilgrimage to Kusu Tua Pek Kong Temple.