The orchestra was at the Changi Airport Terminal One getting ready to check in the instruments and the luggage. The flight was scheduled to depart after midnight the following day. 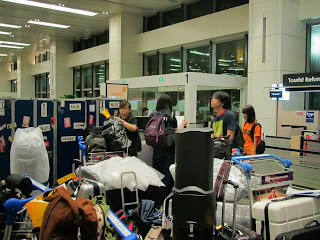 To reach Vienna, the orchestra would first fly via plane to Prague before taking a coach to Vienna. To reach Prague, there would be a transit at Dubai Airport.

At the Changi Airport, our group met the members of Singapore Management University Symphonia (Singapore) who were also participating in the same festival, albeit that they were taking part in a different category of the festival's competition.

4 Jul 2013 (Thu): The plane that the main group of the orchestra has taken reached Dubai Airport. I was thankful that I have gotten some rest on the flight to Dubai. My vague impression of Dubai Airport was that it was huge! We had to travel to another part of the Dubai Airport to catch our connecting flight to Prague. 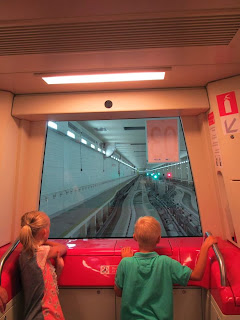 
What is one of the first things a travelling orchestra would do when it reached its destination? Other than clearing the immigrations, it was to unpack the instrument cases so as to check that the instruments are in good conditions.

At the Prague airport, I noticed that there was a Bohemian deli shop selling food. There was a few money changer at the airport. In Prague, the currency in use is the Czech Koruna. I learnt a lesson at Prague airport, the exchange rates for Czech Koruna using Euros would be better if we were to have the exchange made outside the airport. Here is sharing this tip with you.

Email ThisBlogThis!Share to TwitterShare to FacebookShare to Pinterest
Labels: Europe