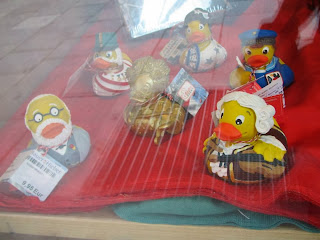 12 Jul 2013: It was free-and-easy time in the morning and early afternoon. With the guidance of a few friends, I was able to tag along to visit the city area of Munich yet again. We visited Bauer-Hieber which essentially is a place to find various sheet music. I wondered why we could find musically inspired rubber ducks there too?

Another destination was the Neue Pinakothek Museum in Munich. The museum has a post-modern architectural style. For a distance, the museum blended very well into the surrounding picturesque landscape.


In this museum, visitors would have the privilege to view Van Gogh's Sunflowers (1888) and Claude Monet's Water Lilies (1915). Van Gogh's Plain near Auvers (1890) is also a part of the museum's collection. These were the paintings that I had used to study in art-history class when I was a teenager. Somehow, I felt comforted to see the original works face-to-face. The flowers in Van Gogh's Sunflowers looked alive!


I was attracted to a sculpture, The Fallen (1915/16), by Wilhelm Lehmbruck. It seemed to connect with me at some level. It was also an interesting piece of art compared to a museum that was dominated by paintings.

Then time seemed to pass so fast and soon we would on the train that took us from Marienplatz to Haar, where the hotel was located. We were on the roads again to get to Munich airport. We were on our way back to Singapore. In the meantime, a number of the orchestra members chose to extend the trip. 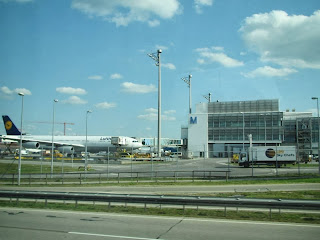