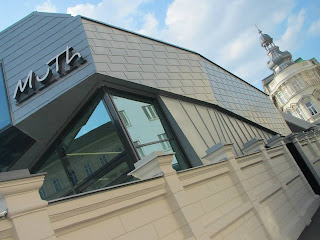 MuTh, also known as Musik und Theater, is Vienna's new venue for music and theatre. Opened in Dec 2012, it is also the Vienna Boys' Choir Concert Hall in Augarten. Augarten is a public park situated in Leopldstadt. I read that the park was designed in the French Baroque style. Having known this piece of information, I realized that I have been too focused in delivering the performance at MuTh that I did not make time to see the park and smell more flowers!

The festival organisers have been very thoughtful. They arranged for heavy and bulky instruments to be given a faster route, with minimal stairs, to access to the back of the stage. Such arrangements helped make the loading and unloading of instruments much easier. 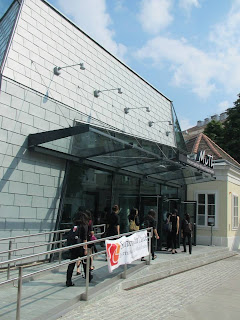 At the backstage, we waited patiently. Perhaps I was getting thirsty from the long day, while waiting for our turn, I felt thirsty. In my efforts to find a way to quench my thirst, I asked one of the crew members if there is any place to get water. The reply that I received revealed to me that the source of the water in Vienna is from the Alps! I could drink water directly from the tap in Vienna! I went to get water from the tap. The water tasted good!

The National University of Singapore Symphony Orchestra was scheduled to perform at MuTh at 5.00 p.m. local time. Before it was our turn to perform, we had the pleasure to sit in the audience seats to listen to Menlo Park High School Choir (South Africa) conducted by Jeanmari van Papendorp. The hall was intimate and the acoustics was good. The choir was outstanding.


When it was our turn to perform, the responsiveness of the hall must have a positive effect on me. I was feeling a little tired from that long day and yet I felt full of energy when I was playing on the stage. Every single note that was produced sounded clear on stage! The hall at MuTh has good acoustics although I have yet to figure out the science behind.


Looking back, I am thankful to have performed at both the Wienner Musikverein and the MuTh with the orchestra. The opportunity to travel and play with an orchestra is a special and meaningful one. There is a lot of work behind-the-scene to make it possible for an orchestra to travel to Europe. Many thanks to the Centre for the Arts, the orchestra's management, executive committee and all members for making this trip to Vienna possible.

Another exciting and memorable day shall await us the next day.

That evening, I was too much focused on performing that I have missed enjoying the beauty of Augarten. The lesson learnt, the next time when I perform at a venue that is new to me, where feasible, I shall make some time to explore the nearby vicinity or at least smell the flowers that are nearby the concert venue.

Wow, what a wonderful experience performing at MuTh. You should have take a short tour of the vicinity and show us some pictures of the place.