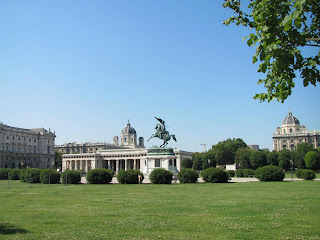 
Striking a balance is always helpful in life. I felt thankful that there was half a day set aside for members of the National University of Singapore Symphony Orchestra (NUSSO) to be treated to a guided tour of the city of Vienna and the Schonbrunn Palace. I cannot imagine visiting Vienna without having caught a glimpse of some of the splendours of this city.

I also learnt that if we were to see a white and red flag on a building in Austria, it is an indication that the building is a historic building. Please do not be surprised if I were to tell you that I was looking out for buildings with white and red flags throughout the city tour. My only setback was that I do not know how to read German and so could not decipher for myself what the buildings could be.


The orchestra divided ourselves into two groups for the walking tours. My group's tour guide was Beatrice. She presented a nutshell of Vienna's history. What struck in my mind was the House of Habsburg. The names of the monarchs, Maria Theresa, Franz Joseph I, kept being mentioned at various points in the guided tour. There was a lot more that I would probably need to learn about Vienna's history. History itself is more complex that we were told. Maybe I would need a simpler introduction to the history of Austria and the rest of Europe? 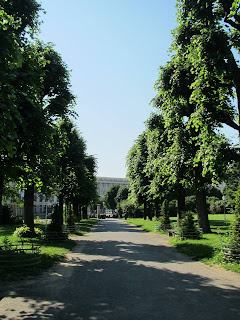 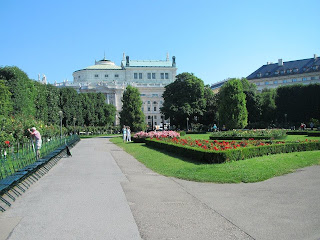 One of our stops during the guided city tour of Vienna was the Spanish Riding School (Spanische Hofreitschule). I learnt that other than being the oldest riding academy in the world, it is also the only riding academy where the High School of Classical Horsemanship has been cherished and maintained for over 430 years. I do not know much about horses yet it was a pleasure to take a glimpse of beautiful horses. 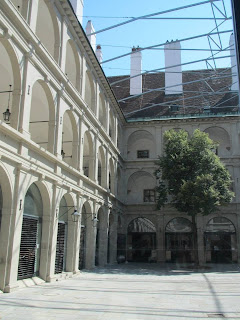 I started to realize that there is so much to learn about Vienna. I felt thankful that we had arranged for a guided city tour of Vienna to get to know this City of Music better. The guide shared with us that the people in Vienna are proud of their culture and art. 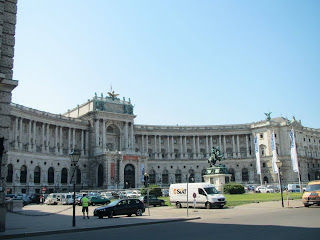 Heldenplatz ("Heroes' Square) is one of the places that we visited. On this plaza, we can find two statues each of a rider mounted on a horse. One of the statue is that of Archduke Charles of Austria and the other is the statue of Prince Eugene of Savoy. I was told that many important events took place at Heldenplatz.

I am thankful that one of our stops during the guided city tour of Vienna was the monument of Mozart. Vienna is the final resting place of Mozart. We did not get to visit his grave however. I later learnt that although historians could trace the approximate location of Mozart's grave (i.e. Vienna's St Marx cemetery). the exact location of where he was buried was unknown. This was contributed by the funerary practices in eighteenth century Vienna where it was common for a few deceased to be buried in the same plot, and subsequently have their remains re-interred. 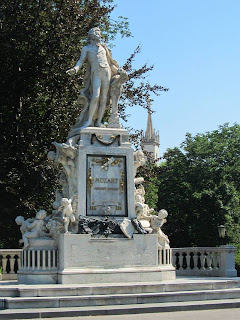 In essence, I am grateful to enjoy a guided tour of the city of Vienna. Many thanks to our tour guide, Beatrice, for showing us around the city. Our next destination was the Schonbrunn Palace. More about Schonbrunn Place in the near future. 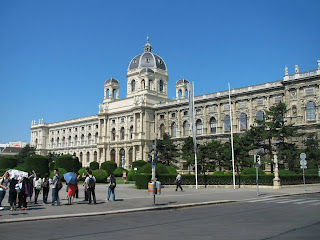