20 May 2012 (Sun):
It was the day when I arrived in Sydney by plane. The main goal for the day was to attend an interfaith service led by Reverend Dr Stephanie Dowrick in the afternoon.

When I reached the Travelodge Sydney hotel in the mid morning, although I was too early to check-in, I was able to store my luggage at the hotel's storage room. After the paper work was done, I was hungry for breakfast (my second serving of breakfast for the day!).


When I reached Reuben Hills, I spotted a queue! This place is popular! I learnt that Reuben Hills is a coffee roastry and cafe. It is well-known for its selection of roasted coffee. The generally unassuming warehouse style interior design and the laid-back ambience of Reuben Hills made it pretty inviting to me. 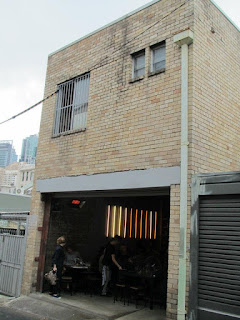 *
A TIP FOR ALL GUESTS:
It took me a while to understand the queue system at Reuben Hills. Each guest of Reuben Hills who are having his/her meal at the cafe ought to get the attention of one of the waiters/ waitresses so as to have his/her name listed on the list of people in the queue. I was told that the waiting time on a Sunday was about 20 to 40 minutes.

*
The queue system was rather confusing for yours truly who was new to Reuben Hills. I was patient with the queue because of the raving reviews of Reuben Hills. While I was queuing, I noticed that there were quite a number of people who came to Reuben Hills to order take-away coffee. The scent of coffee beans was evidently in the air at Reuben Hills.

I ordered an egg baleada (AUD$11 each) and a pint of expresso (AUD$5).I like the taste of the black beans found in the egg baleada. It has a mildly spicy yet sweet taste.  I learnt that baleada is pronounced "Bae-YA-Da".  A baleada is a tortilla filled-then-folded Honduras dish. I chose to order a baleada because it was novel to me. On the other hand, I am not a coffee-lover to feel confident enough to critic the coffee from Reuben Hills. The coffee was nevertheless delightful to my taste-buds. Many thanks to the people at Reuben Hills for the thoughtfully made breakfast. 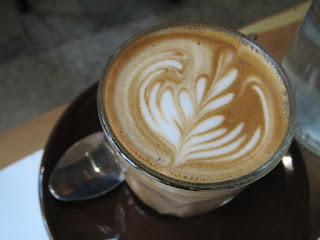 According to the reviews, other highly recommended items from Reuben Hills include the "Not Reuben sandwich", the Dogg's Breakfast and the pulled pork baleada. Do check this place out. I was told by one of my friends that Reuben Hills has been named as one of the best of Sydney's cafes in The Sydney Morning Herald's Good Cafe Guide 2012.