Recollecting nostalgic moments from the past at Night Festival 2012 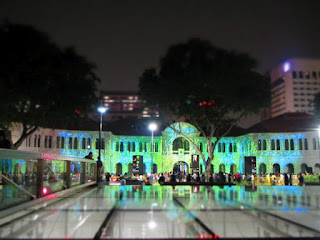 Passion and energy would aptly describe the Night Festival 2012 that had just passed. I was mesmerized by the variety of interesting programmes that the festival had offered that I attended all the four nights. My experience of it was a mix of interesting visual experiences and nostalgic moments.

The light installation Mimoid II by Stephane Beve, Milosh Luczynski and Philippe Rizzotti on the building facade of the Singapore Art Museum combined seamlessly with the music composed by Vuk Krakovic and mixed and SFX designed by Ctrol Fre@k (Jeffrey Yue) to transform one of my favourite museums in Singapore into what seemed to me was a paradise out of this world. 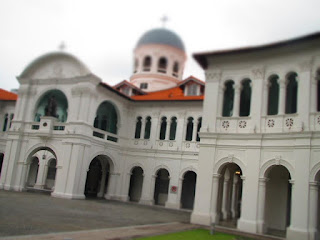 As I walked past the Singapore Art Museum, I was reminded of how this very building had evolved from the former St. Joseph's Institution to an art museum. I wondered how it would have been to be a student studying in a school building that was located in the heart of the city area. Out of curiosity, I started rereading a blog titled Whispers of an otherwise silent world by an award-winning blogger, Jerome Lim. As I read his account, I painted in my mind the images of school children making their way to their schools. I imagined book shops with thriving business because in those days, the students will find their way to the book shops after their school hours. If I were a student studying in St. Joseph's Institution more than three decades ago, I would have looked forward to going to school every single day since there were so many beautiful buildings in the area.

It was rather interesting to realize how attending the Night Festival could have led me to reflect on a moment in past that I had never experienced personally. Somehow, I felt connected to an unknown moment in history.


The Armenian Street was one location that has led me to recollect moments from my past. One of the highlights of the Night Festival 2012 was the spectacular aerial performance named La Argentina - Fuerzabruta presented by Ozono Producciones (Argentina). The entire Armenian Street was filled with excitement. I attempted to capture the visually spectacular aerial performance from a distance and was grateful that the lenses from my simple point-and-shoot camera had captured a glimpse of the magical moments of the athletic dancer travelling in the air.


Along the stretch of Armenian Street sits the former MPH Building. Originally known as the Methodist Publishing House when it was built in 1908, the building was later renamed the Malaya Publishing House. Today, this building is now known as the Vanguard Building. While making time to catch a glimpse of the performances named Night Painting | Cast in Light by Li Cassidy-Peet and Terry Wee, I fondly recall a time in the past when I would visit the former MPH Building to browse the books, buy interesting gifts and sniff the wonderful aroma of coffee and waffles.

To add to my quest for the nostalgia, I found two food stalls during the Night Festival that reminded me of the food that my parents had treated me to when I was a young child. Food has the power to trigger memories indeed!

The Putu Piring stall along the alley between the Substation and Peranakan Museum reminded me vaguely of a time in my childhood when I savoured Putu Piring during visits to night bazaars, otherwise known as pasar malam by the locals. Interestingly, I learnt from Singapore Infopedia that Putu Piring has the same ingredients as Putu Mayam, one of which is steamed ground rice flour. The joy of eating Putu Piring comes when the gula Melaka (palm sugar) in the centre of this rice cake snack oozes out at the first bite. The experience was heavenly as the gula Melaka melts in the mouth together with the bite of the Putu Piring.

The Putu Mayam stall along Stamford Green reminded me of a time in my childhood when I was occassionally treated to this interesting snack that was made from steamed rice flour that had been pressed into noodle forms and served with granted coconut and sugar. I was not too keen with the vermicelli-like rice noodles. It was the grated coconut and the sugar that had interest me when I was a child. When I was a child, the Putu Mayam that I had was served flat like pancakes. It therefore intrigued me when I saw that the Putu Mayam that I had ordered at the Night Festival was served like a roll of spring roll.

Overall, the fifth installment of the Night Festival has not only delighted me with the many spectacular light installations and exciting performances, it has in its humble way touched me with a mood for nostalgia. As I reflect on my memories from the past and recollect moments in history that I had not personally experienced, I felt a little more rooted to Singapore, a place I call my hometown.