7 Oct 2012:
Upon arrival at Ngurah Rai, Bali's International airport, we spent time looking for our guide near the guide meeting point. There were a lot of people who were also waiting for their guide or designated drivers at the airport. It would take a trained pair of eyes to find their designated guide or drivers in the crowd.

Thankfully, after close to half-an-hour, I noticed our guide who was carrying a piece of paper that bears my full name. Our tour group is made up of my friend and I, and a couple. There were four of us in the tour group. We were greeted and welcomed by our guide who led us to a van.

Our tour was to start immediately. That is perhaps the best thing about taking up a tour package. If I were visiting Bali on my own without a tour package, I would prefer to get myself settled into the hotel before making way to explore the locality.

On our journey on the van, our guide who spoke in English shared with us about the general demographics of Bali. I learnt that the better times to visit Bali were from May to August. The wet season in Bali will usually start from 20th October to December, so these would be months to avoid unless one loves the rain.

Religions in Bali
We had our first-hand experience of religions in Bali when we visited Pura Jagat Natha Nusa Duar. I learnt that the official religion in Bali is Hindu. Bali's version of Hinduism is different from the version that is practised by Indian Hindus. This special version of Hinduism can be traced to the great Majapahit Hindu kingdom that once ruled Indonesia and had evacuated to Bali as Islam spread across the region. Unlike the other parts of Indonesia, Islam is a minority religion in Bali.


At Pura Jagat Natha Nusa Dua, we learnt that the colours black and white are intended to symbolize evil and good respectively. 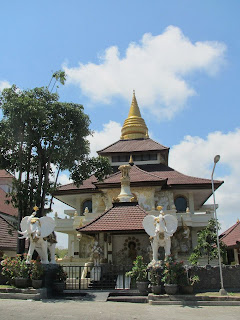 Nyang Nyang beach
Our next stop was at Nyang Nyang beach. Here, I was treated to a nice sea breeze from a high attitude. The beach lies many feet below. I found the monkeys at the place rather amusing. They seem to be finding ways to make life more interesting for themselves.

Here, we were treated to pisang goreng, which is banana that has been dipped in a batter and fried.


Located at the southern point of Bali, this ancient temple is one of the most spectacular on the island of Bali. It is possibly spectacular because of how it is perched on a steep and fascinating cliff that is 70 metres above the Indian ocean. Entry to the temple is available for a fee, which was included in the tour package. It was quite breathtaking to catch a glimpse of this temple from a distance.

From my reading of online information, the temple was said to have been expanded by a Javanese sage, Empu Kuturan in the 11th century. Subsequently, another sage, Dang Hyang Nirartha, is credited for constructing the padmasana shrines. The only thing was that my tour guide did not explain these to me. When I attempt to ask, I had difficulties communicating with him.


This is one place to keep a very close grip on our belongings and to stow away the eyeglasses. No thanks to the monkeys who are known to snatch the visitors' belongings. Our tour guide had specifically requested that I remove my spectacles. However, it was challenging to see without my glasses so I had them put up while guarding them carefully against the monkeys.

The learning point from the missed visits was to learn to go with the flow. I had attempted to explore if we could cover these places on other days, however, it seemed not feasible with due considerations of traffic conditions and operating hours of these places. I have learnt to be more flexible even when it comes to attending a group tour. On the positive side, this meant changes can be made with the tour so long as there is mutual agreement between the parties involved.

In the meantime, please stay tune for more on my trip to Bali if you are interested for more.

Email ThisBlogThis!Share to TwitterShare to FacebookShare to Pinterest
Labels: Bali