Our tour of Bali continued with our hospitable driver and tour guide. The couple who was in the same tour group as us decided to give themselves a break from the tour. That left me and my friend to tour parts of Bali with the guide and the driver.

If there was a theme for our second day in Bali, it was probably to get us closer to the arts and the culture of Bali. We began our day travelling on the roads. It took us about one hour to drive to Kesiman Village to watch a performance of the Barong and Kris Dance. The performance started at 9.30 a.m. and it was essential to factor in sufficient time to travel there.

Barong and Kris Dance
The Barong is a lion-like creature in the mythology of Bali. The Barong represents the good. When we reached the venue of the performance, our thoughtful guide passed each of us a copy of the English description of the entire performance. This dance performance was accompanied by a live gamelan orchestra. I was pretty entertained by the music from the gamelan orchestra.

The performance began with a prelude. This was followed by five different acts. 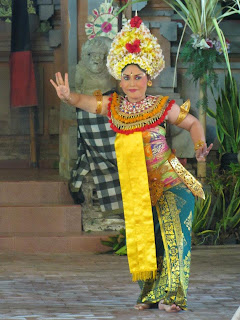 In the first act, two female dancers danced to the music. These two dancers represent the servants of the Rangda, a mythological evil monster.

In the third act, Sadewa, son of Dewi Kuti was captured and brought to the forest.

The fourth act showed Sadewa being given the gift of immortality by Siwa, the God. Eventually, the Rangda surrendered to Sadewa.

I read that the masks of Barong are considered sacred items. Before the masks are brought out, a priest must be present to offer blessings by sprinkling the masks with holy water. While the Barong looked a bit intimidating a first sight, after the performance, I could re-experience it as a benevolent character. 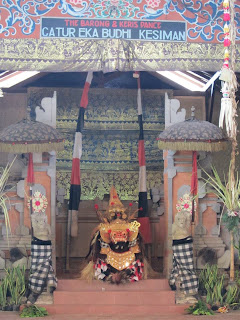 After the performance, members of the audience had the opportunity to take photographs with the Barong. My friend and I took a photo with the Barong too. This is one memorable performance that I was glad to have watched when I was in Bali.

My afterthoughts were perhaps each day, there will be a fight between the good and the evil. May the good triumph.

Email ThisBlogThis!Share to TwitterShare to FacebookShare to Pinterest
Labels: Bali