On 23 June 2015, I visited the Museum of Fine Arts, in Boston. Getting there was pretty easy as it was nearby a T-subway station. 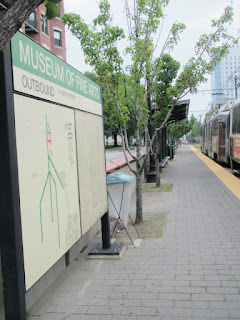 The highly cultured citizens of 19th century Boston were keen collectors, who collected art and antiquities from around the word. Their bequests have resulted in the Museum of Fine Arts having one of the foremost holdings outside Paris of Impressionist painting. This museum also has an outstanding collection of Japanese and other Asian art. I felt thankful that I have had the opportunity to visit the Museum of Fine Arts when I was in Boston.


Was it jet-lag? I felt pretty sleepy by the morning. Nevertheless, I realized that there was no way I could see every single item in the Museum of Fine Arts. To make the best out of my time there, I chose to attend the guided tour that focuses on the Highlights of the Museum's Collection. This is a guided tour worthy to attend. It is one hour in duration and gives a good highlight of a few of the museum's noteworthy collections. This guided tour did not cover the Impressionists' artworks which were so popular that visitors would have any way checked them out. It did cover a few of the important works by the significant American artists. 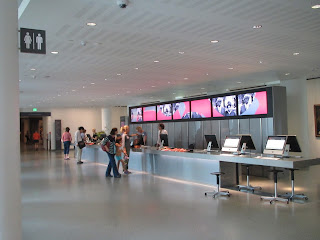 After the guided tour, I decided it was necessary to treat myself to lunch first. I needed energy to stay awake and to comb as much area of the Museum of Fine Arts as possible. The rout guide was very helpful and pointed me to the Garden Cafeteria. It was an affordable, comfortable and family-friendly place for lunch. On the way day, I passed by a lovely garden that was within the premises of the Museum of Fine Arts. What a lovely treat to a landscaped garden before having my meal at Garden Cafeteria. 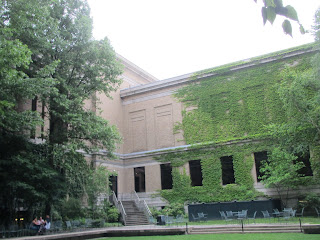 For the rest of my visit to the Museum of Fine Arts, I rented a multimedia audio guide to lend myself a good introduction to some of the important exhibits in the museum's collection.


To manage the sleepy-spell, I went to the nearby New American Cafe after lunch to get myself a cup of espresso. It was not a good choice it seemed. While beans from Starbucks were used, the calibration of the grinder and the pulling of the espresso shot was far from ideal, leaving me to drink a cup of astringent coffee. Thankfully, the coffee redeemed itself because it did kept me awake for the rest of the afternoon. A lesson learnt, it takes a lot of skill and craft to be a good enough barista.


When I was at the section of the Impressionism art in the Museum of Fine Arts, under the Europe collection, I felt I was brought home to a familiar place in which I get to see the artworks that I have read and heard about in real person. It was a privilege to see the originals and be up close with the artworks. I could see the fine details of the brush-works. This was the place where fine artworks had been collected.


One of the special exhibitions in the Museum of Fine Arts was Hokusai, featuring the art of Hokusai. Hokusai is definitely a skillful draftsman. I had the pleasure to look at Hokusai's Thirty Six Views of Mount Fuji which were essentially ukiyo-e prints compiled as a picture book. I learnt that Hokusai made extensive use of the imported European synthetic pigment known as Prussian blue. This pigment is a bright colour that is highly resistant to fading, and it was cheap enough in Japan to be used in woodblock printing as well as painting. I was most intrigued by Hokusai's toy prints. These were intended to be cut to pieces, folded, assembled and then enjoyed in three dimensions. Hokusai was ingenious! This was the exhibition to see. I was thankful I was there!


I had spent the entire day there. There was so much to experience at the Museum of Fine Arts that one day was not enough. I felt very thankful that I could enjoy an entire day devoted to appreciating fine arts.