Breakfast at Pancakes on the Rocks

One of my friends, LL, recommended that I visit Pancakes on the Rocks for breakfast. This is one lovely place for pancakes and casual dining.

In the evening, Pancakes on the Rocks is always seen with a long queue waiting outside the restaurant. I suppose it is because it has established itself as Sydney's favourite destination for pancakes, pizzas, salads, crepes and ribs. I read that Pancakes on the Rocks is the Gold Award Winner for the best Casual/ Family Dining Restaurant from year 2003 - 2011. I suppose this is where people in Sydney finds a treat to lovely food.

The history of the establishment, I read, could be traced all the way back to 1959 when the founder, Roger Meadmore set out on a driving trip from New York to Miami. The idea struck in him and his comrades that pancakes from the Howard Johnson's wayside restaurants that they had kept pulling in to will be a great idea for Australia. Mr Meadmore later realized that the secret to making those American style pancakes that he had was the way the wheat germinated and hence resulting in the type of flour that was used for the pancakes.

I was pretty impressed by the creativity that was present in making pancakes and crepes of various varieties when I was looking through the menu at Pancakes on the Rocks. There were so many wonderful choices to decide from. Visit its website and take a look at the menu and you will be fascinated with the variety of creative choices: http://pancakesontherocks.com.au 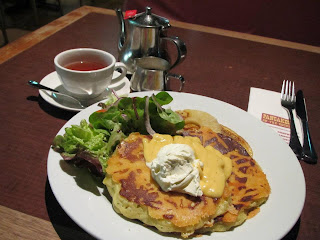 When I visited Pancakes on the Rocks on 25 May 2012, I decided to order a plate of Potato Au Gratin for breakfast at Pancakes on the Rocks. The potato au gratin on the pancakes added a savoury taste to the dish. I thought it was a brilliantly creative idea to add sour cream, lettuce, grilled pineapple and banana to the pancake. This is one dish that is lovely for people who likes a savoury meal that is not too sweet.