I shall continue with this feat of recollecting and writing about my recent trip. The sun had been nice to shine in the late afternoon, and I allowed myself to take a walk.

Mystic happened to call me on the phone when I was taking the public transport to the food court at the basement of Le Meridien Orchard Hotel for dinner. She sounded cheerful on the phone, and her cheerfulness was a little infectious. I was trying hard not to load my blues off her.

Anyway, I shall write about 4 Aug 05 and hopefully I could share some of the photos taken on that day on my other blog.

***
Entries from my tour journal are in quotations:

This is the day that QH, XM, LL and myself will travel to Edinburgh by the train. In the morning, we took the bus service number 20 from the hostel to Aberdeen City. I can't remember what time it was exactly, but I think it should have been about 6.45 a.m. in the morning? Breakfast was not even served at the hostel at this time.

Along the way, we were greeted with seagulls. I remember XM saying that he found the seagulls to be noisy and they had woke him up from his sleep. I find them nice however. Novelty perhaps?

When we reached nearby the railway station, we had breakfast at one of the eateries. The milk is fresh. It tasted much fresher than the milk one could find in Singapore.

I was making my first attempt of not trying to convert whatever I was spending in sterling pounds to Singapore dollars. This way, I won't have too reserved about spending on what is necessary. For example, a single-trip 15 minutes bus-ride cost 1.10 pounds. This is approximately about $3.30 in Singapore currency. For once, bus services in Singapore appeared much more affordable. I shall assume that such transportation charges were considered reasonable in UK?

On the train ride to Edinburgh, SY showed us the recordings that he had taken last night during the orchestra's concert. He also told us about how he got to meet a gentleman who has a professional camera during last night's concert, and how he had managed to request for the soft-copies well-taken photographs taken by this gentleman. He showed us the photographs that the gentleman had taken of the orchestra during the concert. One look, one could tell these were well-taken using a professional camera. I felt tempted to own one, but I would prefer to live within my means and work towards getting one deservingly through my own efforts. 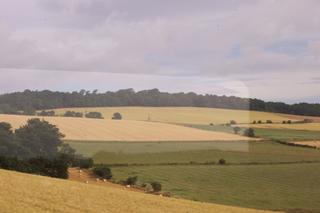 Aside from viewing the recordings and browsing the photographs on SY's laptop, the rest of the time on the train was spent talking about last night's concert and admiring the sceneries along the journey. I was marvelling at most of the sceneries. A pity I know that my camera has its limitations and there is only so much of the beauty of the sceneries that I could capture using my camera.

When we reached Edinburgh railway station, SY was nice to give us some directions to start us off our journey. There we bid farewell to him. I remembered that he was on his way to catch a flight to go to Belgium.

Our first stop in Edinburgh was the Edinburgh Castle. Pictures tell a thousand words, so I shall leave it to the pictures to tell you more about our tour around the Edinburgh Castle. We waited close to about half-an-hour just to clear the security check and wait for our turn to purchase the ticket. It costs 9.80 pounds per adult to enter the Castle. No concessions for students unfortunately.

The Edinburgh Castle is a fine-looking castle. There are museums located within the castle itself. I was simply feeling rather tired to read and view every of the exhibits in the museums, but I enjoyed simply the sense of being present inside a castle.

After the Edinburgh Castle, we walked to The Scotch Whisky Heritage Centre which was nearby.

The admission is 8.50 pounds per adult and the admission charges include a small glass of whisky to sample plus a Glencairn Glass which visitors could take home with them. I read the notes about the Glencairn Glass and basically the notes meant to say that this glass was crafted with care to enhance the appreciation of the whisky."

From this trip, I have learnt that there are five main factors to consider in the appreciation of whisky:
1) Colour of the whisky
2) Body (whether the whisky has light, medium or full body.)
3) Nose (smell the aroma when one nose the whisky and to distinguish if it is malty, smoky, fruity, chocolately etc.)
4) Palate (the characteristics of the whisky on the palate: whether softly sweet, rich and fruity or peppery and spicy.)
5) Finish (whether the flavour remains for a long time or if it disappears quickly.)

"The whisky that we were each given to sample was a blended whisky. It tasted pretty strong but it warmed the throat. Most needed when the weather outdoors was rather cold. And my goodness, I still do not know how to apply those whisky appreciation tips!

Anyway, that was one rare occassion when you would find me drinking an alcholic drink. It seemed a shame not to drink at least a drop of whisky when one is in Scotland. Later, I added ginger beer and some ice-cubes to the whisky and doing so helped make it easier for me to finish it.

Inside the Whisky Heritage Centre, we also got to learn about the history of the whisky.

When we were out of the whisky heritage centre, I felt quite hungry. At that time, it was raining outdoors. LL said that the fish-and-chips from 162 Canongate is said to be nice by one of the guide books. As such, we walked for about 20 minutess from the Whisky Heritage Centre to that fish-and-chips store, in the rain. Thank goodness XM who was with us served as a very good navigator and he helped with the navigating and led us to 162 Canongate.

When we reached there, we realised that the shop would only open for dinner at 4.30 p.m. We were there too early, it was not even 4.15 p.m. when we reached the shop. I suppose we have been lucky that the gentleman in the shop allowed us in at 4.15 p.m. so that we could buy our food. We also realised that fish-and-chips at the shop was to be taken-away and there was no place for eating-in. Since there was no eat-in, and we had to be back at the Edinburgh train station by 6.30 p.m., and we can't afford to be late and miss the train, we decided to head for the railway station after we have bought our food at the shop. By then, the rain had stopped.

We headed for the railway station and when we were nearby the station, we sat down at the food court of this shopping centre called Prince Mall to have dinner. Fish-and-chips in UK goes with salt and vinegar. Neither ketchup nor chilli sauce was provided. In Singapore, one would usually be given packets of ketchup and chilli sauces if one were to order fish-and-chips. In UK, vinegar is the popular choice? Anyway, I like the taste of vinegar.

Tiring day, slept as early as I could."

Links to more related photos found on my other blog:

i am enjoying the photos very much. thank you for posting them. the clouds and the sea is especially nice.

i must add i love the plains too. the sheer vastness of space is just breathtaking.