Onboard the tour 'The Other Side of Geylang'

Yesterday, I participated in yet another trail of the Expedition 'H' that is held in conjunction with the Singapore Heritage Fest. This tour titled The Other Side of Geylang indeed brings me to a different side of Geylang. It is not a food tour, neither does it cover anything about Geylang which is known for being a red-light district. Nevertheless, it was quite an interesting tour because I get to hear about the stories of ordinary individuals who have in some ways been heroes because of their deeds and contributions.

The first part of the tour brought us to a museum which I have never been before. The museum, the Kong Hiap Museum, is located at 8 Geylang East Avenue 1. It houses the collection of the late Venerable Kong Hiap (广洽法师). Our group had the privilege to get a guided tour specially by Cultural Medallion winner, Tan Swie Hian! 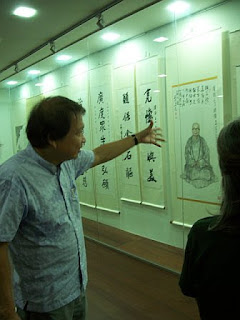 This museum houses a very good collection of original works by Feng Zikai. The museum also has many good calligraphy pieces by several masters. It is worth a visit for anyone who likes Feng Zikai's works and for those who likes calligraphy works. I remember that there was one piece of calligraphy that was written using the blood of Venerable Kong Hiap. In order to have his blood used as a medium for the work, he had to go through a no-sodium diet for a period of time. By the end of the tour, I have learnt a bit more about Chinese calligraphy and the life of Venerable Kong Hiap and his art collections. Many thanks to Tan Swie Hian for his insightful guided tour.

For those who wishes to visit Kong Hiap Memorial Museum, it is opened on Saturday, Sunday and every 1st and 8th of the Lunar Month, 10 a.m. – 5 p.m.

The next stop was Masjid Khadijah at 583 Geylang Road. I learnt about the history of Masjid Khadijah. The mosque is named after the late Mdm Katijah Binte Mohamed. In my opinion, the heroes behind the mosque are not only the late Katijah Binte Mohamed and the many donors who have contributed to the mosque. The people who forms the congregation that makes up the mosque who have dedicated their time and devotion to sustain the running of the mosque are also the heroes.

I am very impressed by the way the mosque is being runned. I heard that the nasi beriani cooked by the ladies of the mosque for the Nasi Beriani Amal programme is a well-known brand in the Muslim community. The mosque has raised much funds through the Nasi Beriani Amal programme whereby nasi beriani is being sold. It is not the amount of funds raised that is important, it is the devotion that the people who serve the mosque has that truly matters. I can sense that they take pride in what they do.

The mosque is a beautiful mosque. During the tour, personnel from the mosque gave us a very interesting overview to the history of the mosque and even explained to us about set-up of the prayer hall. The mihrab will indicate the direction of Mecca, where the Kaaba is located. Many thanks to the mosque for its graciousness in hosting us. 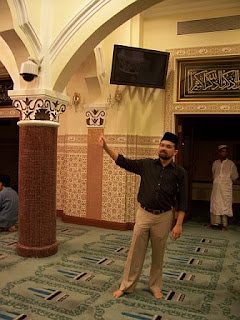 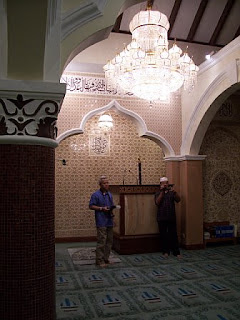 After the visit to the mosque, the tour bus led us to the oldest Chinese temple in Geylang, the Chong Teck Tong Temple. I learnt about the history behind the temple. Somehow, while I can't quite hear clearly the name of the founder of this temple, I felt touched by her compassion towards the less fortunate. She was a heroine in her simple way.

At the temple, we were given a short briefing about the wooden-fish (mu-yu) and other tools that were used in prayer rites. We were also given a demonstration on how to offer incense to the gods. Many thanks to the temple for hosting us, and so generously serving us vegetarian meals at the end of the tour. 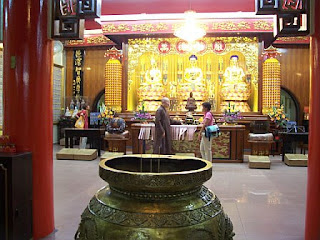 The final part of the tour took us to a part of the Geylang which I won't have been able to visit if not for the tour. It took us to the private studio of local artist, Wong Keen. I realised it was situated in an area where many 'ladies of the night' would stand about when night falls to wait for potential customers. At the studio, we had the privilege to speak with Wong Keen, and even see some of his latest works. Right below is a glimpse of one of his works which was inspired by scenes from Geylang. 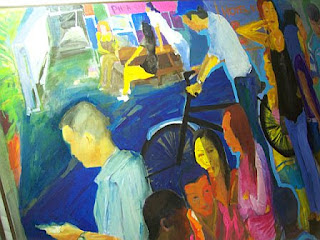 On the whole, the tour might have been more educational if it could cover some aspects of the history of Geylang. Nevertheless, it was still worth my time as I've managed to come face-to-face with two local artists, and visited places which I have never been before. I realised that there is still so much I have to learn about Singapore, the country that I grow up in.

By the end of the tour, I realised that Geylang's night-life is not just about food and vices. There's another side of Geylang which we may have not noticed: the art, the devotion and the dedication towards the community. It is the ordinary heroes that make these other sides of Geylang thrive.
Posted by oceanskies79 at 7/27/2008 11:08:00 am

Hi - I was on the same tour - the tall white guy from Perth. I agree with everything you wrote and great pics!

OMG!!! Tan Swee Hian himself!! Why didn't you text me!? I could have fly down to meet him. *pouts*

Interesting tour of the different places of worship. Geylang is a wonderful place, if only there is no vice.

Hi Matt, thanks for coming by. :)
It had been an interesting experience for me as a local to see 'the other side of Geylang'.

eastcoastlife: err... I didn't realise you wanted to meet him so badly. Did you visit the Tan Swee Hian museum in the end?

There's a lot of interesting places in Geylang, I am starting to realise. Thanks for bringing me about Geylang the previous time.