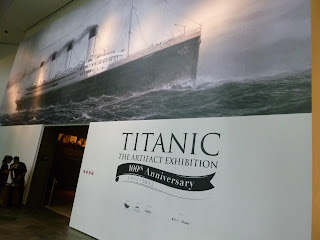 Recently, I visited the exhibition Titanic: The Artifact Exhibition. Here's a simple post on my visit: Experience Titanic the safe way.

This exhibition will be held at the ArtScience Museum at Marina Bay Sands from 29 Oct 2011 - 29 Apr 2012. Singapore residents can request for special discounts to this exhibition. For more information, please visit http://titanic.sg and http://www.marinabaysands.com/Singapore-Attractions/ArtScience-Museum/
Posted by oceanskies79 at 1/26/2012 11:38:00 pm No comments:

Email ThisBlogThis!Share to TwitterShare to FacebookShare to Pinterest
Labels: exhibition 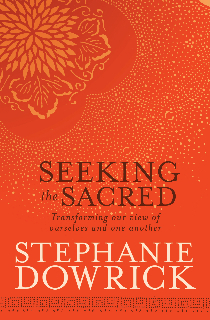 This book took me more than a month to read while commuting on buses and trains. Nevertheless, it was a comforting and insightful read. I may have to re-read it a few more times to better appreciate the depth of the ideas.

I chose this book as I have grown to find comfort in the writing style of Stephanie Dowrick. I experiences her writing style as one that gently inspires and encourages while providing the space of kindness to grow.

This book, like its synopsis says, is "a book for the spiritually curious, as well as for those already engaged with the deeper questions". It is an invitation to "discover what makes our lives sacred, satisfying, and meaningful". I like the inclusiveness of this book. It is worth a read especially for someone who lives in a multi-religious country like the one that I am living in.

The key topics in this book are Reverence, Identity, Love, "Do No Harm" and Transformation. Each of these topics provided depth to invite us to "imagine the world we would live in if we dared to see all of life as sacred - unconditionally."

With this, I wish you blessings for the Lunar New Year. 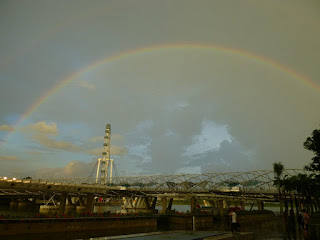 The double rainbow appears
Lending a lighthearted lift to my shattered soul
Reminding that relief is here,
Right now.

(Notes: This evening, I saw a double rainbow from the Art Science Museum. Sighting the rainbow inspired me to write this poem.)
Posted by oceanskies79 at 1/21/2012 09:37:00 pm No comments:

I surrender.
To the silence of the night,
I surrender my darkest emotions:
Anguish, confusion, disappointments, sadness and more.

And have the faith that
The angels of the night,
Shall transform this silence into
Echoes that sing the music from the heavenly realms. My love for greeting cards

I started collecting greeting cards and notes from a time when I was possibly in lower Secondary level. The collection started as a way to remind me of the care and encouragements that friends so generously give. I continued to collect the cards over time after I have experienced that it is therapeutic to browse through and reread even a portion of the collection.

Some cards may bear simple words of greeting yet the thoughtfulness that came with them can be deeply felt. Some cards bear interesting designs and often remind me of one of my dreams to establish a business that aims share kindness and care through greeting cards, notes and gifts. Some cards which were hand-made reminded me of the care and effort that went into realizing the cards.

With this post, I thank my friends for the thoughtfulness and care that were so generously shared, through simple gestures such as sending an encouraging card. Thank you!
Posted by oceanskies79 at 1/18/2012 11:12:00 pm 4 comments:

This afternoon, I met up with one of my friends for tea and a visit to the National Museum of Singapore. Over tea, I learnt that she has established an online fashion and accessories boutique.

It seems that shopping online has helped bring convenience to the consumers, while providing consumers with easier access to more unique products at affordable prices.


This October (7 - 17 Oct 2011), I visited Italy on a group-tour package provided by one of the tour agencies in Singapore. My intention was to be in Italy to experience and to appreciate the architecture in parts of Italy as well as the natural landscape.

Please find a list of the posts that I have written regarding this visit to Italy:


Special thanks to my travel-mate for her patience throughout the trip. My thanks to our coach driver, the attentive tour-manager and the knowledgeable tour-guides. I was grateful that our tour group had generally enjoyed good weather and great hospitality throughout our stay in Italy.

It was an enriching experience to be in Italy. When I was younger, I had deemed it as one of my favourite countries in the world that I would like to visit. I was attracted to its seemingly rich history and the interesting 'shoe' shape of the outline of this country. I hope to visit Italy and the rest of Europe again.
Posted by oceanskies79 at 1/10/2012 10:44:00 pm 3 comments:


Naples, also known as "Napoli" in Italian, is a city in Southern Italy. During my recent trip to Italy, the tour group had a night stay at Naples after our visit to Pompeii, the UNESCO heritage site.

According to Wikipedia, Naples' historic city centre is the largest in Europe. It is one of the oldest continuously inhabited cities in the world.

While we were at Naples, we learnt that Naples is famous for its pizza. The tomatoes from Naples is said to be one of the freshest in Italy. However, I had missed the chance to enjoy a Pizza Margherita from Naples.

One of the puzzling things that I could not quite comprehend when I was in Naples was that the locals seem to like to remind tourists not to be out alone at night. The extent of the cautionary attitude was so great that while I was in Naples, I did not visit any single place except the Chinese restaurant that we had dinner in, the hotel and the ferry terminal where we took a hydrofoil to Capri island. Whatever else that I saw in Naples were observed from the tour bus! Interestingly, I was influenced to be obedient and did not venture out during my entire night in Naples.

Whatever it is, I am rather tempted to consider visiting Naples one day in the future (perhaps with a bodyguard so as to assure the cautious locals). Naples offers a very beautiful sea view, and so I shall end this post with a photo of the charming sea view taken from the tour bus. Be delighted. 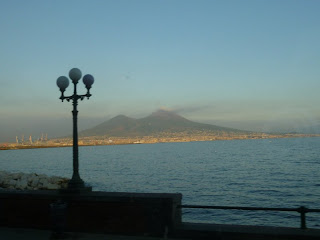 Email ThisBlogThis!Share to TwitterShare to FacebookShare to Pinterest
Labels: Italy

A message to the Sun 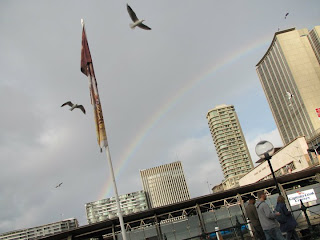 Dear Sun,
Could you please write me a caring message
On a droplet of water with your rays?

To paint a lovely rainbow across the skies.
Turn the gloomy colour of the monsoon season
To a healing palette of the sacred


This is a New Year's Blessing by the late Irish poet John O'Donohue. I find the poem comforting and kind. May this bring you blessings for a meaningful and joyful year of 2012. And all shall be safe and well.

Bennacht — A Blessing — by John O’Donohue

On the day when
The weight deadens
On your shoulders
And you stumble,
May the clay dance
To balance you.

And when your eyes
Freeze behind
The gray window
And the ghost of loss
Gets in to you,
May a flock of colors,
Indigo, red, green
And azure blue
Come to awaken in you
A meadow of delight.

When the canvas frays
In the curach of thought
And a stain of ocean
Blackens beneath you,
May there come across the waters
A path of yellow moonlight
To bring you safely home.

And so may a slow
Wind work these words
Of love around you,
An invisible cloak
To mind your life.