It is interesting to learn about how Chinese from different parts of the world may use different Chinese characters to name a place. This happened to Sydney, as I have learnt from my good friend, XS.

According to a source on About.com that I have found on the internet, it was stated that the Chinese name for Sydney is 悉尼.

However, I trust my friend, XS, who shared that in Taiwan and Hong Kong, Sydney is commonly known as 雪梨. This is further verified when I was browsing through the copy of the Chinese newspapers published in Sydney which I had bought. Sydney was referred to as 雪梨.

When I went to souvenir shops in Sydney, the souvenirs that I had seen that bore the Chinese characters also refer to Sydney as 雪梨.

Which Chinese name would you prefer to call Sydney by?

Anyway, I have learnt to consciously refer to Sydney as 雪梨 as that's the term that is being used by my friend. 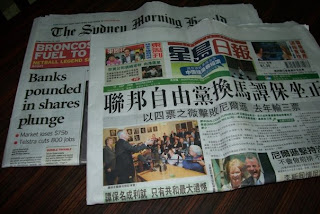 Hi, I read your blog discussing the Chinese by accident.
The people live in China Mainland will be prefer "悉尼" than "雪梨" to the word Sydney. But persons who come from Hong Kong may be prefer "雪梨".
In fact, there are many words having the different translation in China Mainland, Hong Kong and Taiwan, especially for the place name or person’s name in English.

Wendy: Thank you for your invaluable comments. I have learnt something new now.