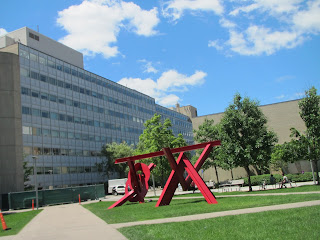 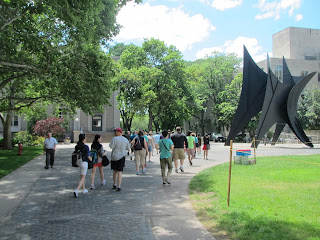 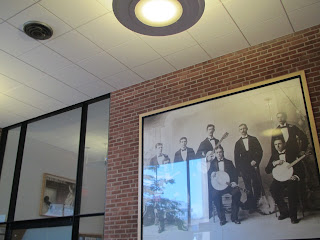 Here is to inform you of an upcoming event: 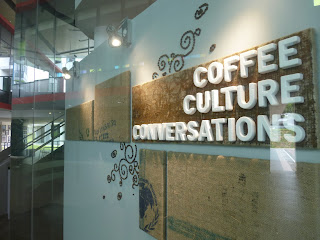 From 17 Sep - 28 Oct 2015, there is an exhibition on anything coffee and inspired by coffee held at The Art Gallery @ Glocal Connect Village, Temasek Polytechnic. You could find out about my visit to the exhibition here: Places: Coffee.Culture.Conversations.
Posted by oceanskies79 at 9/26/2015 07:58:00 pm No comments:

Read: The World Atlas of Coffee

In the hope to learn more about coffee, from beans to brewing, I borrowed this book from the library. This is a useful resource book for enthusiasts who love coffee.

The book is classified into three different sections. The first section which provides an introduction to coffee is informative and succinct enough to the point.

The second part of the book, discusses about coffee "From Bean to Cup". I have learnt quite a number of new things from this section.

Section Three of the book provides a good reference to Coffee Origins. Other than listing the taste profiles of coffee beans from various countries, this section listed the varieties in the selected regions in these countries.

Section One and Two are fairly accessible to read. Section Three makes a good reference to refer to when it comes to the topic of coffee origins.
Posted by oceanskies79 at 9/08/2015 10:50:00 pm No comments: 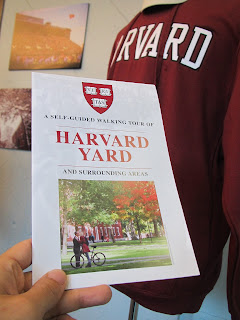 When I was visiting Massachusetts, I planned for a visit to Algiers Coffee House and Harvard on the same day. 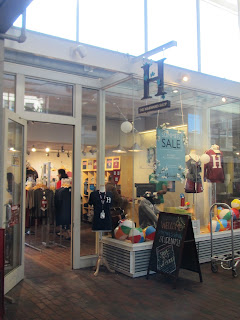 Our guide led us to various locations on the Harvard Yard. Our guide introduced us to the Massachusetts Hall and the Harvard Hall. The former is the oldest building that is still standing at Harvard and the second-oldest academic building in the country. When the guide spoke about Harvard Hall, she shared with us the story of the fire that had happened in January 1764 which had destroyed the former Harvard Hall that was on the same location.


As we progressed into the tour, we learnt about the Johnston Gate, the Science Center and the Memorial Hall. I learnt that the Memorial Hall is the building whereby first-year students of Harvard would dine in so as to foster a sense of community.


Widener Library in Harvard had a moving story that touched my heart. The library was built using funds donated by Eleanor Elkins Widener in honour of her son, Harry Elkins Widener, Class of 1907, who was a rare-book collector who died on the Titanic in 1912. There were four stipulations set by the donor to honour Harry Elkins Widener. One of the four stipulations was that free soft-serve ice-cream will be served. To find out more about the moving story behind the Widener Library, please visit this site: http://hcl.harvard.edu/libraries/houghton/exhibits/widener


Concluding the tour was a visit to John Harvard Statue. It was very popular with visitors. This is called the "Statue of Three Lies", cast in 1884 by Daniel Chester French. I learnt that because there were no known portraits of John Harvard, French had used someone else as a model. Next, Harvard College was not founded by John Harvard but was named after him. Thirdly, the College was founded in 1636 by vote of the Great and General Court of the Massachusetts Bay Colony, and not in 1638.

My reflections following the tour was that Harvard makes thoughtful efforts to foster a sense of community among its students and the Harvard community. I felt thankful for the opportunity to learn a bit more about Harvard. I love the spaciousness of Harvard Yard, and it was a lovely experience being there on a day in summer. 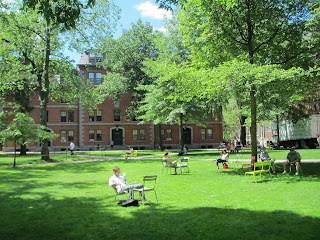 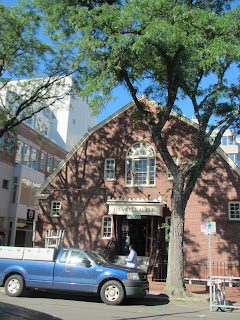 Before visiting Boston, I had done a bit of research and listed down a few of the places in Boston where one can enjoy a good cup of coffee beverage. One of the cafes on the list that I had compiled was the Algiers Coffee House at 40 Brattle Street, which was relatively near Harvard.

It was in my plan on 24 June 2015 (Wed) to visit Harvard so that I could visit both Algiers Coffee House and Harvard. 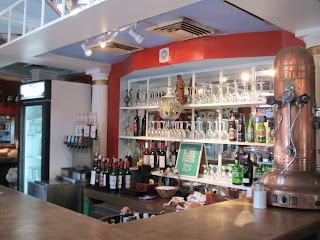 
When I was there, I was on a specialty coffee drink spree. I ordered a cup of espresso. It was balanced and had a lingering aftertaste. The cafe had an old world vibe and I felt I was in a different world of its own. It is a charming place to visit and the cafe has two floors. The second floor terrace overlooks Brattle Street. 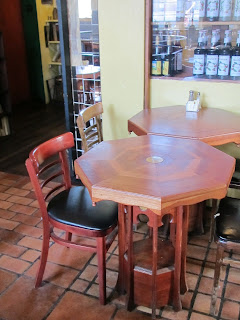 This is a cafe to visit especially if one is visiting Harvard.