A short word of appreciation to Mistipurple and Simple American for their assurance that my journey has not been too boring for them. Yours truly is in need of positive strokes at times.

Now I shall start recalling about the rest of 9 Aug 05:

After excusing myself from the rehearsals, it was pure waiting. The bus that would take a small group of us to Tarves for the performance would only come about an hour later.

If I am not wrong, only about nine of us would be travelling to Tarves, the rest of the orchestra were in the rehearsal hall practising. If we were to join the rehearsals for the festival orchestra, we would end up excusing ourselves at an untimely moment, so the decision was to miss the rehearsal.

The festival orchestra would probably be rehearsing Brahms' Symphony No. 2. Nice music. I love Brahms' symphonies. It was an unsettling feeling to be missing the rehearsal simply because of missing to play Brahms' music.

Then the group of us who were to travel to Tarves managed to find ourselves a small room to practise for our performance later the evening. YY and his string quartet members practised Schubert's Op. 125 No. 1 (Allegro Moderato).

The next item we rehearsed was Da Hai (which approximately means "The Sea" in Mandarin), arranged by He Zhan-hao. It was the very first time I had played it with the ensemble, which consists of members from both the two string quartets mentioned earlier. It was definitely so much easier to sight-read and play Da Hai than any of Brahms' symphonies.

Soon, came the bus to pick us to Hillhead hostel to get our belongings. Our conductor and one of the accompany university staff members also came with us. Several members from the Young Sinfonia were also onboard the same bus. They would be performing in the same concert. When everyone was onboard, the bus headed for Tarves.

I must have been so tired such that I slept throughout the journey to Tarves, for I realised that I did not take a single photograph of the journey from Aberdeen to Tarves.

The members from the Young Sinfonia rehearsed first. I listened. Pretty good playing. I was impressed by the young cellist who played very well for his young age.

I took a short walk about the concert venue. I find Tarves a peaceful town, and I wished I could have more time to walk further. But there was not much time to move too far. 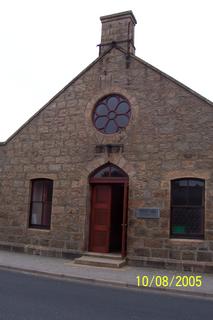 Above photo: Where the concert was held.


All seemed to went reasonably well in general.

When it was my turn to play The Elephant, I beg your pardon that there was no laughter nor giggle. I guess that the audience did not know that they could do so, so they held themselves back? But it was fine. I don't actually know if they do like to listen to me play? I must have been such a self-critic. I still got that very bar just after the transition section wrong. And because I repeated playing The Elephant and I got it wrong again, I got it wrong twice on the stage! So I must be thankful that the ensemble had so ingeniously followed me well to cover my very mistake. While playing, I have learnt to let go and move on. But after the concert, I thought to myself that a discerning ear would have heard that I was a quaver short because of my slightly fast tempo at that bar. Wondering if "the elephant" had decided to take flight then? Anyway, I suppose I shouldn't be discrediting myself too much for that may be very detrimental to one's ego.

After the performance, one member of the audience was so kind to come up to us and tell us that she felt "touched when she listened to Da Hai". Not forgetting to mention, I felt that the applauses from the audience after Da Hai was played was significantly louder than the other items played by members of the orchestra, including The Elephant. Maybe the audience's ears prefer something that does not sound too Western?

Like I have mentioned, our most generous and kind host gave us a treat to dinner. Members from both our orchestra as well as from the Young Sinfonia were present. Dinner started with a slight sense of awkwardness at the beginning. We didn't know how to relate our appreciation to the host.

Thank goodness, our conductor stood up and he thanked the host on our behalf for remembering that very day (9 August) was Singapore's National Day. The host has been very thoughtful, before the start of the concert, he gave a short speech. I did not get to hear it clearly because I was backstage then, but I supposed that the host had so graciously announced that it was Singapore's National Day.

Our conductor invited us to say toast to the host by using the Chinese's (or is it Cantonese's?) way of saying "Yum-Seng". http://www.yumseng.com/about.html has good information about what "Yum-Seng" means. It is the English equivalent of "Bottoms Up".

"YUMSENG" is usually shouted out three times in succession, and with increasing volume. The first syllable "YUM" is always extended, whilst the second syllable "SENG" is short and sharp.

Afterwhich, our conductor invited the folks from our orchestra to sing the Singapore's National Anthem, and we sang, up to the first chorus. Thereafter, the ice seemed to be brokened. People in the room started warming up to one another.

Food was wonderful. Well, it may seem simple, the cooking was good. The ice-cream was especially delightful. I helped myself to a second helping of the ice-cream. We were also served wine, but I suppose you might have guessed it that I decline all offers to be served wine. Praise me for being self-disciplined would you?

After a wonderful dinner from our most kind host, we headed back to Aberdeen. In fact , I was sleeping throughout the journey back to Tarves.

I slept as early as is possible when I reached the hostel. It was already quite late then. I managed to sleep just before midnight, and that was comparatively later than the times that I had slept on the previous nights.

Anyway, there was a sense of relief and "mission accomplished" to realise that I have performed The Elephant. There were mistakes, but it reminded me playing solo in front of an audience may not be as daunting as I have imagined. Of course, I know I could do better. Practise, practise.
Posted by oceanskies79 at 9/04/2005 06:48:00 pm

i can imagine it must have been pretty nerve wrecking quite like the music exams. and yes, practise practise. :)

actually, it was less nerve wrecking. the things I play in my Grade 7 exams are much harder than The Elephant.