After the tea demonstration at Meijiawu Longjing Tea Plantation, there was a slight revision of the lunch plan. We were led to a nearby restaurant that was within the compounds of Meijiawu to enjoy a delightful lunch. The lunch was a pleasant one and left me with a generally good impression of Hangzhou cuisine. 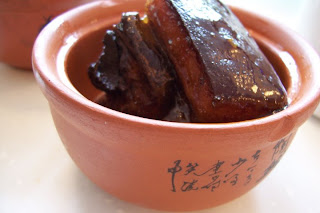 We were each treated to an individual small bowl of Dongpo meat. Dongpo meat is named after the literati, Su Dongpo. Su Dongpo had served as the prefectural governor of Hangzhou for a period of time.

There seems to be various versions on how Dongpo meat came about. The version that my tour guide told us was that Su Dongpo was a gourmet who was knowledgeable in culinary art. He came up with a dish that was made by simmering pork and wine in a container that looks like tea-pot. He did not give the dish any name. Subsequently, people started cooking pork the way Su Dongpo did, and they named the dish "Dongpo meat".

I personally try to cut down on eating red meat as a dietary preference. Nevertheless, in my stay at Hangzhou, I have made an exception to eat two servings of Dongpo meat. The meat is soft and has a smooth texture. While it has many layers of fat, I suppose an occasional sample of Dongpo meat will help me better experience the culinary culture of Hangzhou. I was told that Dongpo meat goes well with cups of green tea. I guess it was perfect that the Dongpo meat that was served that the restaurant near the Longjing Tea Plantation was served in containers that looked like tea-cups. Savouring good food is an art itself in Hangzhou, I reckon.