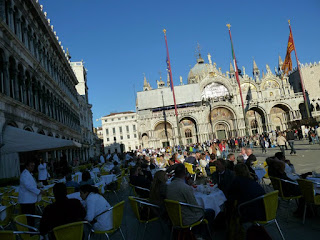 In an earlier post, we have taken a glimpse of the gondola rides in Venice, and the art of glass-making in this city. This post explores a few of the well-known structures in Venice.

St Mark's Basilica
The word "Basilica" was originally used to describe a Roman public building. St Mark's Basilica is built on a Greek's church cross plan. It is crowned with five huge domes. It became the city cathedral of Venice in 1807. 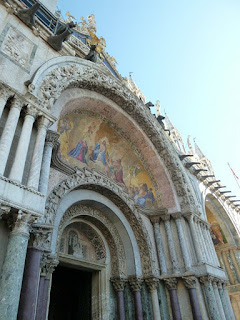 Visitors to the St Mark's Basilica will find it mesmerizing to admire the mosaics of the atrium. These mosaics were created in the Byzantine tradition (related to churches using a traditional Greek rite). When light shines on the mosaics, the precious gold leaf over glass tiles shimmer and dazzle delightfully.

The marble tiles on the floor were also great works of art. Assembling the marble tiles in precise patterned arrangements that seem to create optical illusions must have been a task requiring dedication and perseverance. 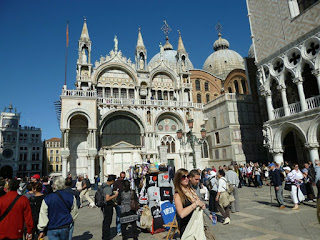 The Ascension Dome, which is the central dome of the building, has mosaics laid out to depict the New Testament. There is a mosaic of Christ in Glory decorating this central dome. I know these because I have done some reading up. The influence of Byzantine art can be clearly seen in this building. This influence can be traced historically as Venice had became an independent Byzantine province in the tenth century.

Influenced by Eastern architecture, the delicate geometrical designs and lattice-work stone screens can be seen being featured on the facades of the St Mark's Basilica.

The Treasury of the Basilica contains a repository of precious artifacts, reminding visitors of Venice's position as a world power from the 12th to 14th centuries. Admittedly, there was not much time to visit the Treasury, and a token entrance fee was required to enter the Treasury.

Here is the official website of St Mark's Basilica: http://www.basilicasanmarco.it/WAI/eng/index.bsm 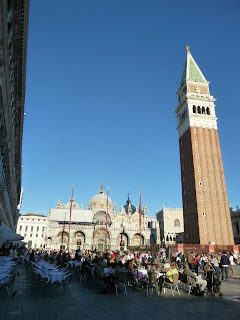 Clock Tower (Torre dell'Orologio)
This clock tower is richly decorated. It was build in late 15th century. The design consists a display of phases of the moon and the signs of the zodiac. The gilt-and-blue enamel clock face was designed with seafarers in mind. However, please pardon me, I was busy enjoying St Mark's Basilica that I have totally missed out on making time to admire the design of the clock tower.

Bridge of Sighs
This bridge was built as a passageway between the Palazzo Ducale and the prison. It was said to have taken its name from the sighs of prisoners being led to trial as they walked along this bridge. Somehow, due to the way it was presented to visitors on the day of our visit, the Bridge of Sighs appear a little less enticing than expected.


Doges Palace
This building combines the architectural styles of Byzantine, Gothic and Renaissance. It was the official residence of the 120 doges who ruled Venice from 697 to 1797. The "doge" was the senior-most elected official of Venice and Genoa. These two cities were republics and elected doges. The last doge was Ludovico Manin, who abdicated in 1797 when Venice passed under the power of Napoleon's France following his conquest of Venice. 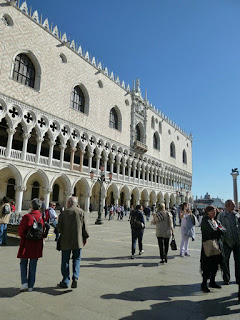 The feature of Doges Palace that I was attracted was strangely the arched vaults that extends from the columns of the corridors at the ground level. 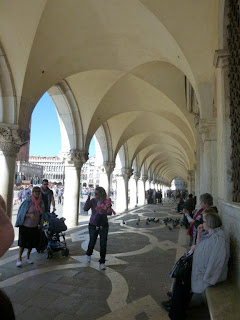 ***
Venice is a beautiful city. As Venice is accessible largely by vessels that float on water, anyone planning to visit Venice may wish to travel light. I cannot imagine carrying bulky luggage up and down a gondola to check into a local hotel.

One of my key learning points from Venice is to maintain respect for traditional art and take steps to ensure the regeneration and continuation of traditional craft and art. The art of Murano glass making and gondola making are part of everything else that forms the essence of Venice.