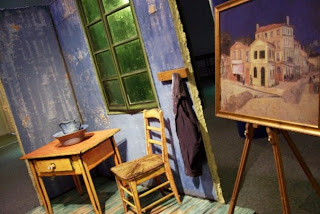 Does the photo right above look familiar to you? Folks like myself who loves the works of Vincent Van Gogh would instinctively recognise "The Yellow House". What seemed like a painting in the above photo is not a painting. It is a print of one of Van Gogh's paintings "The Yellow House", the house that Van Gogh had lived in when he was in Arles.

The set-up of the table and chair in the above photo is a reconstruction of what Van Gogh's room in Arles would look like, had the room and furniture be painted in the choice of colours that Van Gogh had used in one of his paintings "Vincent's Bedroom in Arles (1889)".

If it brings you good vibes, just like it did to me, to see images of works by Vincent Van Gogh, you may wish to watch the IMAX movie titled "Van Gogh: brush with genius" now being screened at the Omni-Theatre Singapore.

I particularly like the part of the movie which retraces some of Van Gogh's sources of inspiration, particularly the places and landscapes that have inspired him. Furthermore, it was magnificent to watch images of many of Van Gogh's works appearing right in front of my eyes with a size as tall as eight storeys high. It was simply stunning.

Some may ask, who is Vincent Van Gogh?

Born in the 1853, Vincent Van Gogh was probably best known by most people as an artist. After he moved to Paris in 1886, he came into closer contact with the works of Impressionist and Post-Impressionist artists and he was greatly influenced these movements of art. These influences lead him to incorporate the use of brighter colours in his art. Van Gogh died in 1890 in Auvers-sur-Oise in France.

I like Van Gogh's paintings because I can sense that these were works of art that were painted with great passion and love such that they simply touched me as a viewer. 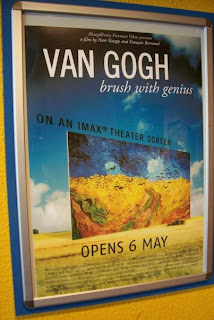 Experience Van Gogh: brush with genius at the Omin-Theatre Singapore from 06 May to Oct 09. This film is approximately 40 minutes in duration and the showtimes can be found here. If you are still undecided, catch a glimpse of the movie trailer here.
Posted by oceanskies79 at 6/09/2009 08:36:00 am

Email ThisBlogThis!Share to TwitterShare to FacebookShare to Pinterest
Labels: art

Hope I could admire his works in person one day.