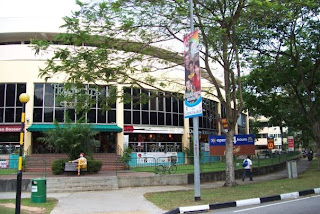 My secondary school's building was previously located fairly near Serene Centre and so I had the pleasure to spend some memorable times there.

In some ways, it was a rather conscious choice for me to eventually study in a Junior College near my secondary school. That probably explains why I still occasionally get to visit Serene Centre during the times when I was a Junior College student.

It was those interesting times with friends that made my growing-up years as a Junior College student much more bearable. Those were also the years when I fold countless origami and doodle on most of my lecture notes. I am thankful that I have positive memories of those days thanks to my friends.
Posted by oceanskies79 at 9/01/2009 07:42:00 am