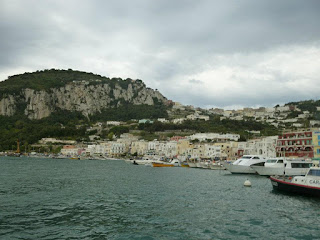 On the south side of the Gulf of Naples, Southern Italy, there is an Italian island in the Tyrrhenian sea that is called Capri. Geological surveys and archaeological findings confirmed that Capri island was once part of the mainland of Italy.

The tour group took a hydrofoil to Capri Island. I was expecting a sunny and warm weather. Yet, interestingly, it was a pretty windy day. Nevertheless, I had an enjoyable ride on the hydrofoil.


I read that Capri is a Mediterranean island with a magical beauty. Our guide told us that on a day with good weather, the water will be in a beautiful hue of clear blue. However, as if it was an excuse for me to return to Capri in the future, the weather was strangely dull and rainy on the day of our visit.

As such, for the rest of this post, please use your imagination to picture the beautiful scenery at Capri Island.


Marina Grande is the main port of the island. This is a charming seaside. I could imagine how it would be on a sunny day. Ferries and hydrofoils to Capri dock at this port.

To get to the town of Capri, we took a mini-bus up the narrow and winding road.


Anacapri is a principal town on the island of Capri. Due to the rain, we did not get to visit the highest point of Capri.

Limoncello tasting
This Italian lemon liqueur is an after-dinner digestivo that is traditionally served chilled. It is mainly produced in Southern Italy. I sampled a small cup of limoncello and it did not have the sour taste of lemon. I like the sound of its name most of all, i.e. limoncello! Doesn't it sound like a musical instrument?

***
Perhaps the dull weather that I had met in Capri was the reason for me to visit Capri yet again, sometime in the future?