Past Forward: Revealing to me the fascinating parts of Singapore 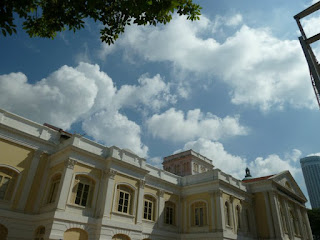 With the intention of supporting some of my favourite heritage bloggers, I attended the event titled Past Forward: A Heritage Blogging and Social Media Workshop on 14 July 2012. The event was held at the Arts House.

I felt that it was inviting to walk into the Neo-Palladian building of the Arts House. This building is probably the oldest government building in Singapore. When the building was completed in 1827, it was used as a courthouse. I learnt that this very building had previously also as a government storehouse and as the office of the Department of Social Welfare. From 1965 to 1999, it was home to the Parliament of Singapore. I thought it was rather apt for a heritage-related event like Past Forward: A Heritage Blogging and Social Media Workshop to be held in a building with a fairly rich history. 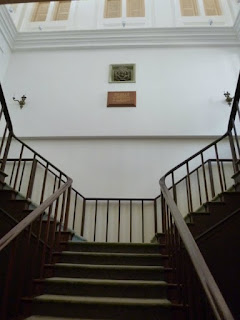 I had to climb several flights of stairs to reach the viewing gallery of the Art House's Chamber. I got myself a pretty good seat which allowed me a good view of the forum panel discussion on the art of blogging or writing online about Singapore heritage.


Tea break was a lovely time to catch up with friends and to get acquainted with new friends. During the tea break, I had the pleasure to learn about the Princess Elizabeth Estate, which was off Hillview Avenue. I felt excited to learn new things about my country and snippets of its past.

After the tea break, I had the challenging task of deciding which workshop to attend. Although I wished I could attend all the four workshops by all the eight speakers, I eventually had to make my choices. I attended the workshops titled Not Just Nostalgia: Music of the 1960s by Andy Lim and Georgiana Glass, and Balik Kampung: Blogging about Your Neighbourhood by Victor Yue and Kwek Li Yong.


During the workshop titled Not Just Nostalgia: Music of the 1960s, I learnt more about the local music scene of the 1960s. It was quite an eye-opener for myself to realize how vibrant the local music scene had been in the 1960s. One of the speakers, Andy Lim (http://singapore60smusic.blogspot.sg), shared with us on his personal experiences making music in the 1960s. Another speaker, Georgiana Glass (http://singapore60smusic.blogspot.sg) spoke about how she has developed a love for music of the 1960s and more. On a few occasions, I could not help but notice the upholstery used on the furniture at the former Parliamentary Chamber. I felt as if I was transported back to a moment in the past because of the physical space that I was in.

The next workshop, Balik Kampung: Blogging about Your Neighbourhood, that I had attended fascinated me with interesting stories about Queenstown and Chinatown. I was moved to learn about the efforts made by Kwek Li Yong and his friends to preserve and educate residents on the culture, heritage and tradition of the Queenstown community through the blog, My Queenstown. Victor Yue's sharing about his experiences growing up and living in Chinatown was interesting too. He has made time to share his observations of life in Singapore Chinatown through bullockcartwater.


The next part of the tour unexpectedly led us to a keramat that was in Chinatown area at Duxton Plain Park. I sensed it was a holy place even though any unobservant person would have missed it. This keramat was said to be the shrine of Sharifah Rogayah (the grand-daughter of Habib Noh) but it seemed that this piece of information has yet been verified.


The tour ended near at Keong Saik Road. I was attracted to the interesting architectural styles of many of the buildings along Keong Saik Road and the nearby Neil Road.


I was simply expecting an ordinary social media workshop where I could get more ideas about how to blog about heritage-related topics, my neighbourhood and culture. However, it turned out that Past Forward: A Heritage Blogging and Social Media Workshop has unexpectedly revealed to me some of the less well-known yet fascinating parts of Singapore. I have learnt more about the Princess Elizabeth Estate off Hillview Avenue, the local music scene of the 1960s, Queenstown, Nanyin music in Singapore, a keramat in Chinatown area and more!

Each day living in Singapore can be fascinating as we rediscover how the past has in some ways influence our present and future.
Posted by oceanskies79 at 9/01/2012 11:44:00 pm