Managing fears: I have conquered a bridge 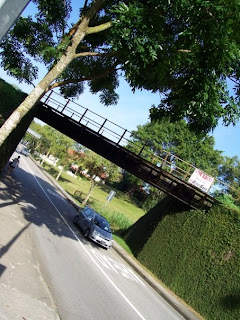 On 20 Dec 2008, I was thankful to be able to be onboard a special trail. The trail to explore the old Jurong Line. 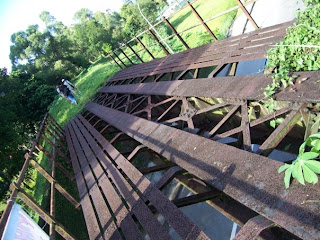 Subsequently, another blogger, Icemoon, wrote about the old Jurong Line in two of his posts: Old Tracks, New Trail (1) - The Bridge on the River U.Pandan and Old Tracks, New Trail (2) - In Search of the River Pandan Railway Bridge. I was similarly just attracted to a particular segment of the railway trail simply because that short segment of the line was familiar to me.

It brought me great delight and pleasure when blogger, Chun See, initated a tour of the Old Jurong trail. It meant that I could explore a part of Singapore that was relatively unknown to me.

I will probably blog about my tour of the old Jurong line in another post when schedule permits. Meantime, I hope to share that I have conquered a bridge that stretched across the River Ulu Pandan. It was a railway bridge that I had often seen on my bus-trip to the university, if I had paid attention to the sceneries around me.

Please visit this post by Icemoon titled Old Tracks, New Trail (2) - In Search of the River Pandan Railway Bridge to get a glimpse how this bridge would look from a distance. 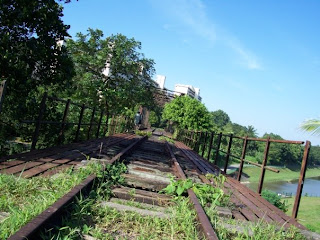 Admittedly, I was feeling afraid when I started crossing the bridge. After I had covered the first one-third of the bridge, I had to walk the next one-third of it without any railings to hold on to. I had to be careful. I do not fear death as much as I fear dying for nothing, without a good cause. The next thing was that I have a fear of heights especially when I were to be high above the ground with limited support. Yet, I realised that if I do not manage my fears well enough, they would cripple me from enjoying the walk across the bridge. 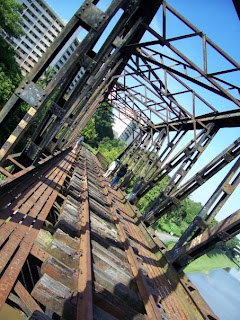 The gentlemen who were on the old Jurong line trail with me were encouraging and urged me forward. I used talking as a way to distract myself from my fear of heights. The walk across the bridge became a practice for managing fears, and being courageous to take steps forward, one at a time. Eventually, I am pleased to share that I have walked the entire length of the bridge, from one end to the other.

that is so cool. i would imagine being a bit frightened too. kudos to the wonderful gentlemen for great support.

Wishing you a blessed Christmas and warm wishes for the New Year.

Mistipurple: Yes, thanks to the wonderful gentlemen. :)

Ordinary Guy: Thank you for your blessings and wishes. I wish you a fulfilling and joyful New Year.

Doreen: Yes, I am glad that I have started my first step. :)
Wishing you a delightful Christmas and a Happy New Year!

PY. It was my pleasure to go on this 'excursion' with you and the rest of the Foyers.

Concerning your description of your experience in crossing the bridge and overcoming your fear of heights, I think your readers cannot fully appreciate how high up the bridge was from the waters below from your photos. Too bad we did not take any photos of the river directly below the bridge. But photo no. 5 from this old post of mine might help.