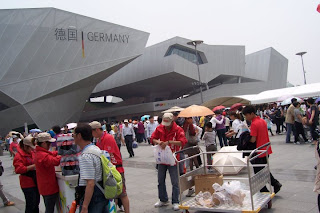 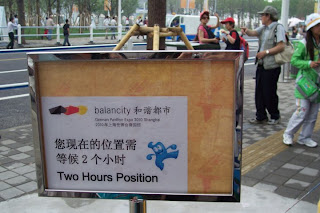 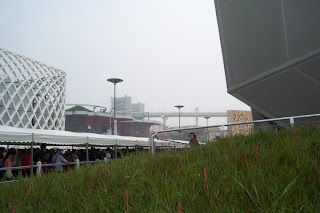 On the left is just part of the queue waiting to enter the Germany Pavilion. 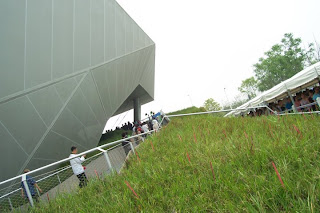 The theme of the Germany Pavilion revolves on the idea of a city in balance, "balancity". Through the various exhibits, visitors can gain an appreciation that an urban city can still be a sustainable and good place to live in "if it provides a balance between renewal and preservation, innovation and tradition, urbanity and nature, community and individual development and work and leisure." There are a number of interactive exhibits in the Germany. In addition, visitors can look forward to view some of the latest green technology that will help make German urban cities sustainable and enjoyable places to live in. The pavilion also showcases various projects from the German art and cultural scene. Many of these exhibits appeal to people of all ages. My mother appeared to enjoy posing with the many interesting exhibits on display. 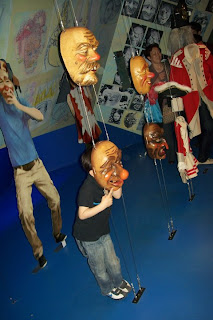 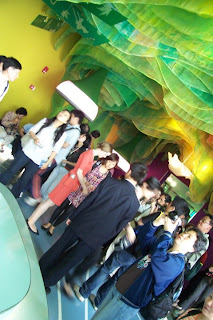 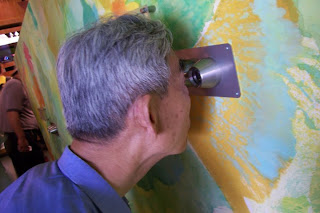 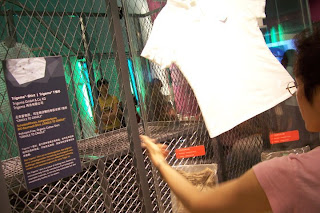 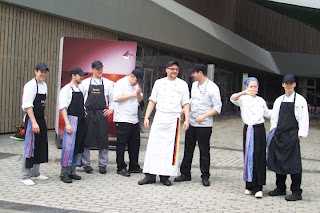 Completing the entire experience at the German Pavilion is an interactive performance titled "Energy Source". In this performance, Jens, a male mechanics student in a German university and female Chinese architect student Yan Yan who is visiting Germany introduce visitors to a special form of energy source. This performance is interactive and requires the participation of the visitors. In this performance, an interactive energy sphere weighing 1.2 tonnes and equipped with 400 000 LEDs hang from a four metre long rod. Its sensors react to the voices of the audience. According to the brochure that I had taken from the Germany Pavilion, the more people participating in the performance, the stronger the swing of the sphere. 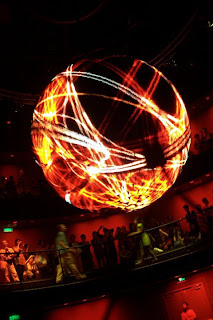 I think the reason why the German Pavilion wins the heart of its visitors and draws the crowd are its commitment to excellence and its attentiveness in displaying good hospitality and sincerity. It was worth two hours to queue for.

*envy envy* I wish I could go to the World Expo. It would definitely be an eye opener for me.

you're lucky to get in the germany pavilion. a friend gave up cos he had a 3 hr queue.

Doreen: You could visit the World Expo Online to sample how it may be like: http://en.expo.cn/index.html