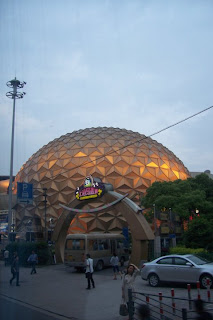 In the month of May this year, my mother and I visited Shanghai and a few other parts of Shanghai. In the evening of 18 May 2010, our tour group went for an optional tour. Each of us paid an extra 280 RMB to watch this performance named "Era", since this performance claims that "Miss it You miss Shanghai". "ERA" was performed at Shanghai Circus World.

The acrobats are well-performed. The lightings and stage effects were of world-class standard. I may not go for it again since I don't personally have a fascination for acrobats. I was more entertained by the live music that accompanied the performance. With the limited narration throughout the show coupled with my limited knowledge on China's ancient culture, it did take me a lot of imagination to figure out what was going on.

Anyway, to give this performance the due credits, I read from a source that "ERA Intersection of Time" lends its audience an insight into China's ancient culture and civilization. My friend who was on the same tour enjoyed the last segment of the show consisting of acrobatic performances involving numerous motorcycles.

You went with your Mom? Hope she finds it interesting too.

There are so many things to do in Shanghai, I used to lament not spending enough time there.

Shanghai is alright. I prefer Hangzhou to Shanghai.