19 Nov 2010: Back to Milsons Point and the evening stroll 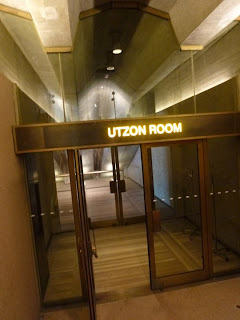 My gut feel led me to visit Milsons Point by ferry. I strolled leisurely to Circular Quay, appreciating the beauty offered by the harbour. 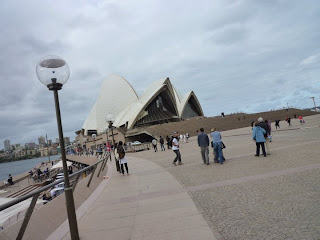 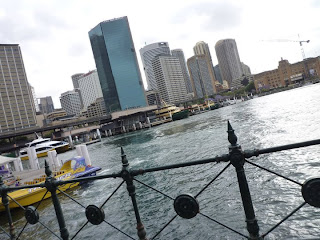 I could have fell in love with taking ferry rides when I was in Sydney. Whenever schedule permits, I would make time to take ferry rides each day! Honestly, after taking the rides, I would tend to experience a rocking sensation for quite a while. Nevertheless, that did not seem to stop me from taking rides and more rides on the ferries while I was in Sydney. I figured I enjoyed the rides because it was simply pleasant to be floating above the waters and the breeze was simply inviting whenever I take a ferry ride. 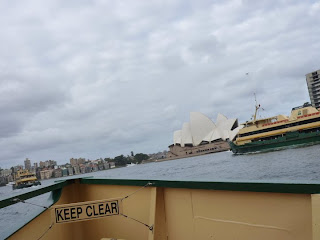 On the way to Milsons Point, I took a photograph of a large cruise. I wonder if it was one of those cruises that would head to Melbourne? 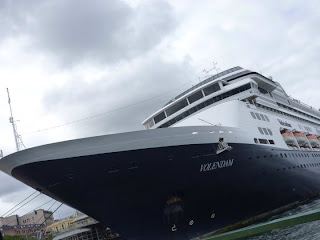 I alighted at the wharf at Jefferey's Street. I vaguely remember it was the wharf to be used until the original Milsons Point & Luna Park's wharf is ready ater going through some upgrading works. I strolled about Milsons Point while keeping watch of the time since I have to ensure that I get back to Sydney Opera House in time for dinner and the concert that would start at 8 p.m. As I strolled about Milsons Point, I felt comforted by the tranquil setting of the place and the darkening skies that were lovingly peaceful despite their gloomy colours. 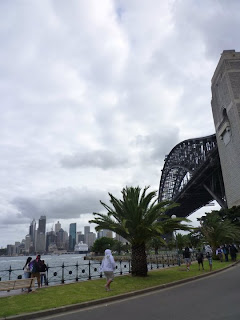 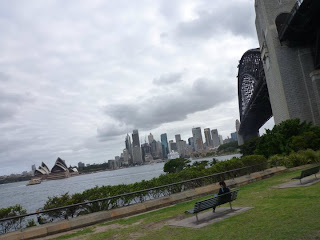 I was planning to take a train or a bus back to Sydney Opera House. However, it proved to be much more convenient for me to be patient and wait for the next ferry. As such, I continued to enjoy and experience the mysteriously peaceful Milsons Point while watching the time so that I would be punctual for the next ferry. One thing that I have learnt to do very well when I was in Sydney was to read the ferry schedules and to plan my schedules around them. The ferry came and by 19 Nov 2010, I had became a more street-smart tourist that I was able to make a good guess if the ferry was heading for Circular Quay without having to ask the crew. Anyway, to play safe, I still checked with the crew where the ferry was heading before I board the ferry.

Before I knew it, I was back to Circular Quay. I headed for one of the cafes at the Sydney Opera House for dinner. Dinner comprised Portabello mushroom and Feta (burger) with peppermint tea. I had quite a good view of the harbour while enjoying my satisfying dinner. I particularly like the juicy Portabello mushroom sandwiched between the fresh-tasting buns. The view and the food were so attractive that diners have to watch out for jealous and daring seagulls who were pretty ready to steal a bite and take over the use of the tables from the diners once the diners move away from their seats. 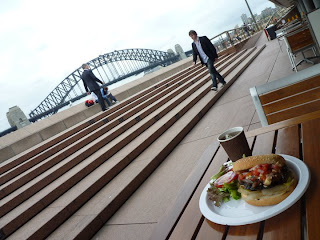 After dinner, hoping to have a good time digesting the wonderful meal, I took a stroll to the nearby Royal Botanic Gardens. I saw some trees with purple flowers at a distant part of the Royal Botanic Gardens. I figured that there might be plaques telling me the botanical and generic name of the tree. However, I did not want to risk being late for the evening concert so I decided I shall somehow find other ways to find out the name of the tree. Familiar places somehow bring back memories. As I strolled about the Royal Botanic Gardens, I fondly recalled the times when I visited it two years ago with my friend, RL. 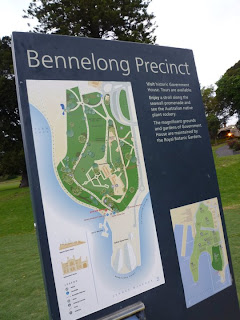 I seemed pretty interested in signs with the name "Bennelong". This was possibly because I was acquainted with the story of Woollarawarre Bennelong during The Rocks Walking Tour earlier that morning. I also could not help but to take a photograph of a cage-like structure which is known as "A Folly For Mrs Macquarie". I have just learnt that a "folly" is a fanciful building designed more for artistic expression than for practicality. Whatever it is, I like its interesting design. 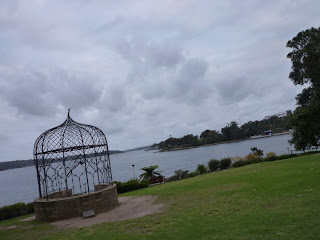 I headed early for the Sydney Opera House after my brief visit to the Royal Botanic Gardens so that I could be in time for the concert by the Berlin Philharmonic Orchestra!

People and moments that I am grateful for:
1) I am thankful for an evening of good weather.
2) I am pleased that people are recognising Jørn Utzon's contributions as the architect of the Sydney Opera House. While this had came pretty late, I suppose it was better late than never.

New things that I did:
1) I travelled to Milsons Point from Circular Quay on a ferry.
2) I had dinner at Sydney Opera House. It was my first dinner ever at the Opera House.

I noticed that you like to take pictures at an angle (i.e. slanting). Any reasons for that? :P

kyh: To offer a different perspective for looking at the usual things. That also allows me to play a bit more with the composition to create a different feel to what I have captured.

Of course, I may risk defying the Golden Ratio, but well, at the end of the day, our eyes and perception have the skills to 'slant' things back to how things should be. I guess everything works out.

Tuti: Thank you. I am feeling better. :)