30 Jun 2011: My train journey out of and into Tanjong Pagar Railway Station 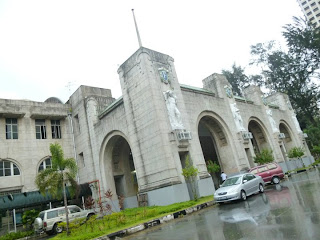 Mr Jerome Lim has written an excellent post with great photographs of the journey on the delayed 0800 Ekspres Rakyat train that departed from Tanjong Pagar Railway Station. Here is his post: A final journey: The last passage to the North. He was on the same train that I took on 30 Jun 2011, and I highly recommend that you could check out his post please. 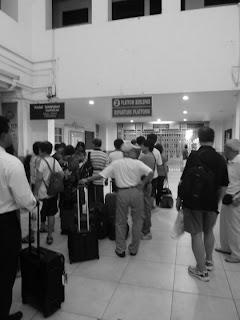 It was a very melancholic day that morning of 30 Jun 2011. It was raining in the morning. As it was my very first time taking a KTM train, I was doing my best to get myself orientated, from getting up the train to finding my seat. Thank goodness that I have met very wonderful people on my ride who looked out for me that day. 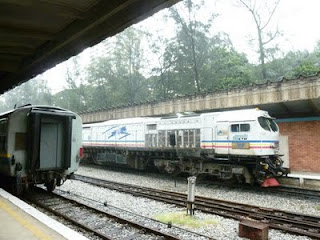 The train ride was exciting. It was moving to see people waiting at the Bukit Timah Station just so as to wave to the train. Alright, admittedly, they were also there possibly to witness one of the last few exchanges of key-tokens at the station.

On the train, I caught glimpses of various parts of Singapore that were familiar to me. Prior to my train ride out of the Tanjong Pagar Railway Station, I had been walking nearby some parts of the railway tracks. Looking back, I was glad that I had done so, and have been mindful to practise safety measures to keep myself safe while trekking along the railway tracks (and being mindful not to bring inconvenience to the KTM staff and the passengers on the train). 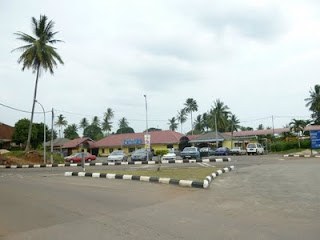 Before I knew it, after clearing the customs, it was time to travel along the Causeway into Malaysia. My train ticket was to bring me to Segamat, which is north of the state of Johor. Over there, time was spent enjoying tea at Nan Yang Coffee Shop, savouring a durian which was said to be organic, and enjoying the seeming simpler way of life. 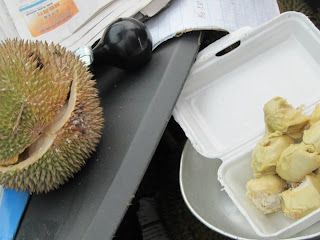 Soon, it was time to be back at the Segamat station to catch the last train into the Tanjong Pagar Railway Station. Being punctual was necessary so as not to miss the train. I started to feel a sense of sadness that after 30 Jun 2011, the KTM trains will no longer go beyond the Woodlands Checkpoint into the Tanjong Pagar Railway Station. Perhaps the consoling thought was that our collective memories of the railway line will continue to live on. 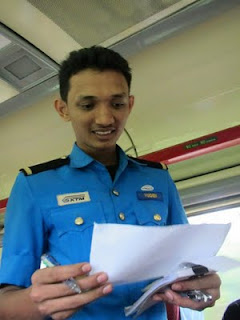 Most of the passengers on-board the last train into Tanjong Pagar Railway Station were keenly aware that they were part of a significant moment in history. I met a number of people on the train who had generously shared their memories of train journeys and their experiences on the KTM train. There was a strong sense of fellowship on-board the train. Strangers easily became new-found friends who shared a common journey. Perhaps this was because everyone on-board was collectively part of a party of people who would be the last passengers to arrive at Tanjong Pagar Railway Station on a KTM train. That will mark the end of the glorious days of train-travel from this beautiful railway station built in the Art Deco style and opened in 1932.


After the temporary stop at the Bukit Timah Station, the train headed for the Tanjong Pagar Railway Station. Along the way, I could see people standing parallel to the railway tracks to wave at the train and its passengers. They would probably miss the train passing by? I felt rather lost for words when the train finally arrived at the Tanjong Pagar Railway Station. I suppose my feelings could be somewhat summed up by the following photograph of the empty train cabin: loss and sadness. 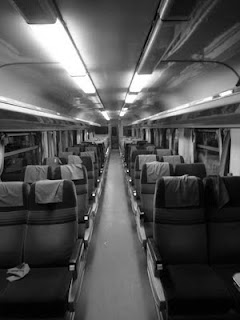 Even the Sultan of Johor who was on his way to drive the very last train out of Tanjong Pagar Railway Station seemed to be in the mood of sadness. I had a glimpse of the Sultan of Johor, and then before I knew it, I realised that there was a huge crowd at the Tanjong Pagar Railway Station. It felt comforting to realised that there were so many people who would miss the railway station, and would now share a similar collective memory of the station with me. 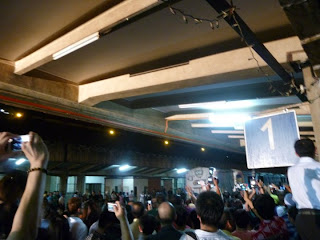 As the very last train out of Tanjong Pagar Railway Station (driven by the Sultan of Johor) departed, the sounds of the train moving along the tracks seemed to be transformed into cries that bid farewell. Bye!


Many thanks to Jerome, Clarissa and Notabilia for initiating the Last Train into Tanjong Pagar, and lots of thanks to all fellow passengers and wonderful staff of KTM for looking out for one another.