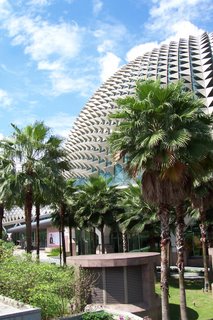 If you have never stepped into the Theatre or the Concert Hall of Esplanade - Theatres on the Bay, it may be a rather fascinating experience to be on the guided tour of this major performing arts centre in Singapore.

If this link does not fail me, you would get to a page with information about the guided tour.

Tour participants on my tour each received a booklet that contains interesting facts and information about the Esplanade - Theatres on the Bay. I was reading the booklet and read that in year 1989, the Advisory Council on Culture and the Arts, chaired by our late president Ong Teng Cheong (then Deputy Prime Minister), recommended the construction of a new performing arts centre. Check this link for more.

The tour started with the Concourse of the centre. Then the next stop is the Theatre. The friendly guide then treated the group with interesting information about how the centre was designed such that the performing venues have qualities of first-class halls. 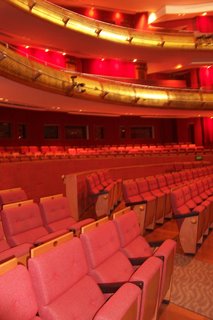 Inside the Theatre. The picture is not as fascinating as the real thing though.


The Concert Hall, I think, would be much more interesting for someone who has never been to the Concert Hall, or has been there only for a few times. The thing is that I attend a concert there at least once every two months. The tour was simply not as satisfying for a regular Esplanade Concert Hall attendee to be on. I would rather go for a concert and enjoy the acoustics and the performance. Anyway, it was still nice to hear about how the Concert Hall achieves its state-of-the-art acoustics. 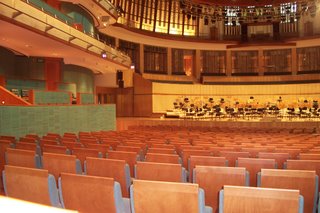 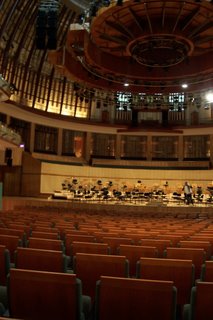 Look up, for the acoustic canopy.

Before the tour, I was dreaming of witnessing the mechanics of how the grand pipe organ works. Well, it was merely a dream not realised yet. I doubt it might be realised in the guided tour, unless someone amends the programme of the guided tour. 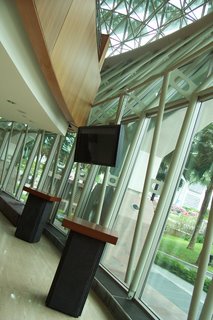 Just outside the Esplanade Concert Hall.

After the Concert Hall, we proceeded to the Concourse again. I heard that there's something special about the stones that make up the wall below. 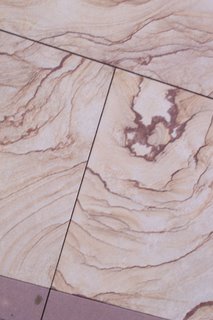 Then we walked past the Esplanade Mall and headed for the Roof Terrace. There's nice sceneries that one could catch sight of up there. 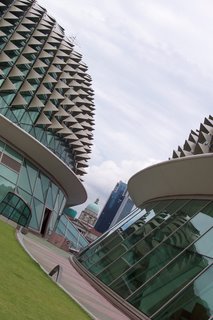 At the Roof Terrace.

The tour ended at the Esplanade shop where I bought myself a Polo-T-shirt as a souvenir.

The Esplanade - Theatres on the Bay is one place that I frequent when I am free. I admit having a liking of it. Do check this place out if you happen to be in Singapore.

A reflection: After spending so much money on building an infrastructure that is intended to be a first-class performing arts centre, it will be more important to have the vision to put in the necessary resources to develop talents in the performing arts, and more so, encourage wider appreciation of the arts in our society. I guess this will require the community's efforts rather than the efforts of just one or a few organisations.

I visited there on the trip sponsored by Singapore Tourism Board... and had a chance to talk to manager..and got lots of good information about this place and I wish Thailand have something like this too...
Envy you...

have always wanted to bring my kids on the guided tour... thanks for the info :)

Maybe you can suggest they have a pipe organ tour. Then you see the building and here some Bach on the organ. I love Bach organ pieces.

I love all your pictures. It makes me want to go there!

More photos can be found here.