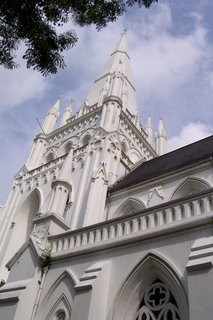 If you have a day free from work, what would you choose to do? On a Monday when I have taken leave from work, I chose to go onboard another of the Original Singapore Walks by Journeys Pte Ltd.

The tour consisted of a tour of the colonial civic district. The tour has quite a grandeur name: The Time of Empire.

The tour group was fairly large, and consisted of people from many nationalities. I wonder if I had made the guide pleased because I was the rare Singaporean onboard who had taken leave from work to join the tour? 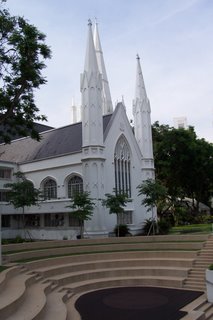 One of the first stops of the tour was at the St Andrew's Cathedral. Did you know this place is full of history? I have found out that several of the plaques on the walls of the Cathedral have also many stories of the past to tell. On the tour, I got to hear about the stories of the Repulse and H.M.S The Prince of Wales too. (This URL lends some ideas about these two ships. Please click on the link.)

One of the participants of the group asked the tour guide why the Cathedral was named after St Andrew, and it was delightful that our tour guide who was backed up by good research could answer that question. This site offers a brief account of the history of the Cathedral:
http://www.livingstreams.org.sg/sac/info/history/index2.html

I was quite excited when the guide pointed me to the organ of the Cathedral. Pardon me, I have an interest to figure out how exactly an organ works, but my recent tour of the Esplanade - Theatres by the Bay had failed to enlighten me on it.

One part that got me quite excited too was when the tour guide showed us a copy of the town plan that Sir Stamford Raffles had envisioned. It seemed like much of that town plan still continues to have an effect on how modern day Singapore organises itself. 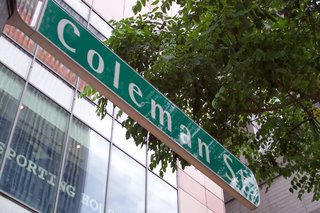 Then we walked along Coleman Street. It seemed that the architect, George Coleman, has played an important part in many of the buildings of historical significance in this part of the world. Before the tour, I did not even know that a fairly magnificent residential house had once existed along the Coleman Street. Well, I won't divulge more, because it is better for those who are keen to hear it from the guide while one is on this tour. 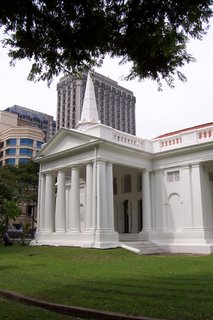 The Armenian Church, built in honour of St. Gregory the Illuminator.

Along the way, the tour group stopped at Singapore's oldest church. The original structure of the church was such that it had a domed roof and a bell-turret. The guide shared with us about the stories of the Armenians and how the Armenians have made significant contributions in the world. We also took some time to walk the Garden of Remembrance. 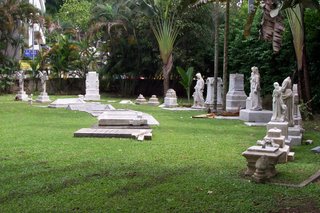 The Garden of Remembrance. There are stories behind these gravestones. 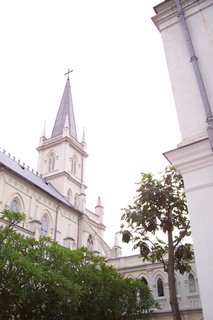 Does this place look familiar? It is C.H.I.J.M.E.S.

The tour guide also gave us an account of the history behind what we we now know as C.H.I.J.M.E.S. I am thankful that there were people who were supportive of preserving this heritage site so that future generation could continue to see it. 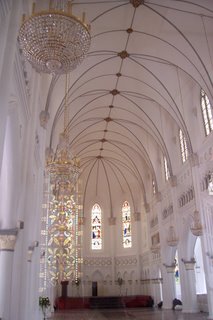 The chapel within the premises of CHIJMES.

A rather interesting story of how a gecko was carved onto this pillar was shared with us during the tour. There is no prize for this, but if you decide that you have time to spare and would like to go on a small-scale discovery tour of CHIJMES, challenge yourself by trying to find this very pillar with a gecko carved onto it. 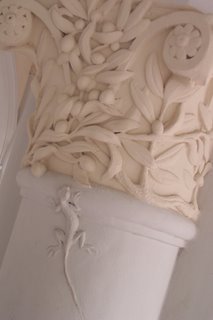 The Challenge: Find the pillar with this gecko.

I was quite attracted to the designs on the tiles when I was at CHIJMES, and I decided to take the picture below. I heard that these were the tiles that were preserved from the Convent of the Holy Infant Jesus that had once stood at the same site. 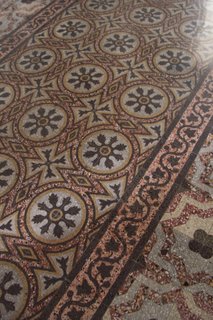 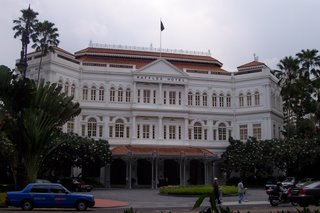 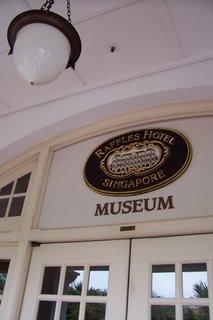 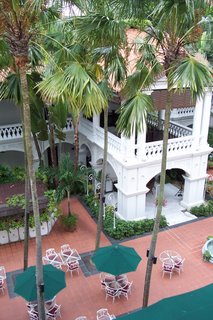 Our final stop at Raffles Hotel Singapore was the Long Bar. In Singapore, this is one place where one can have the permission to throw peanuts shells onto the floor without being penalised with a fine. 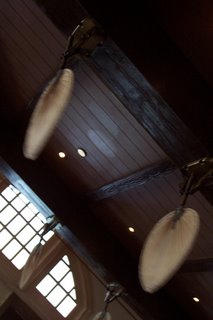 There is still good thing to await for. The bartender of the Long Bar gave us a demonstration of how he concocts the cocktail drink, Singapore Sling. After some search using Google, I found a site that reveals the recipe behind this cocktail drink. The Singapore Sling was originally created by Mr. Ngiam Tong Boon for the Raffles Hotel in Singapore. What better place to drink Singapore Sling than the very place where it was created for? Everyone on the tour was offered a sip of the Singapore Sling. I decided not to. Take it that I was abstaining from alcohol. 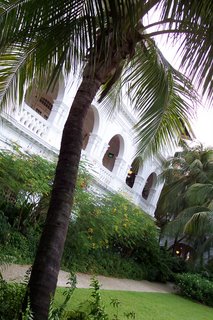 Overall, the tour was enriching, entertaining and educational. It was certainly a fulfilling way to spend half a day on.

For more information of the tour schedule, please check out: http://www.journeys.com.sg/singaporewalks/tours_timeofempire.asp
Posted by oceanskies79 at 5/18/2006 10:55:00 pm

I would enjoy that tour. Though Changi prison is still #1 on my list to see.

do you get to know people when you go on these trips?

Your photography skill is really good :)

the thing that came to my mind was, i've attended weddings in all the mentioned places, except for st. andrew's cathedral.

nice account! again, can i link it on yesterday?

SA: Yup, maybe you might wish to consider planning a trip to this part of the world? *Winks*

Pinkie: Thanks for the compliments. I've spoken to a few of the people from the tour group....or rather...they started asking me questions about whether I have learnt those things on the tour from history classes already.

Misti: Ah. you are well travelled in a way. *winks*

Noel: Thanks for your complinebts. I prefer not to have a direct link from yesterday.sg to this personal blog of mine. Anyway, I have posted the article there. Am just waiting for one more editor to approve the post.