An idyllic evening out

Thanks to the recommendations of Acroamatic, I had dinner with Emz along the idyllic Bussorah Street yesterday. We had dinner at Alaturka, a Turkish and Mediterranean restaurant.

Prior to the dinner, we walked about a part of the Kampong Glam area. I found myself having a liking for the simple yet full of character architecture of the buildings along Haji Lane. After Haji Lane, we walked past Baghdad and could see the golden dome structure of the Sultan Mosque. 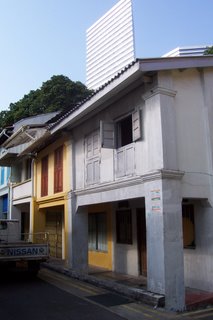 A part of Haji Lane. Taken a few months ago. 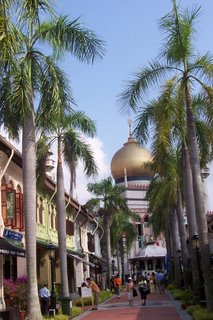 View of Sultan Mosque from Bussorah Street, also taken a few months ago. 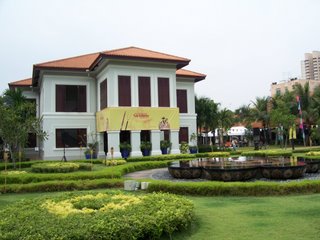 To end our mini-heritage walk, we rested our feet at the restaurant, Alaturka, to dine. I particularly like the decor of the restaurant. It has a cosy and inviting atmosphere.

The dinner was special. It was my long overdued treat for Emz to thank her for playing the piano accompaniment with me for my ABRSM Grade 8 Exams.

I was pretty impressed by one of the waitress who presented herself as being competent in pronouncing all the dishes in Turkish language. I thank her for taking the effort to learn the pronunciation so diligently. Yesterday, I've learnt that "pide" should be pronounced as the two-syllables "pi-dei", and not the one-syllable "pide".

We ordered Musakka, Patlican kebab, pide with spinach and cheese, and a pot of apple tea. We ordered Baklava, a kind of Turkish pastry with pistachios for our dessert. 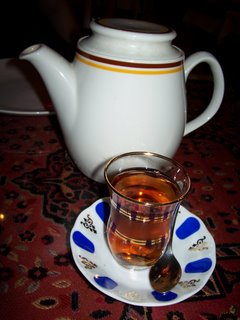 The egg plant from the Musakka tasted quite like potato, but then not quite. We may have mistaken the potato for the egg plant. I like the cheese and the texture of this dish. 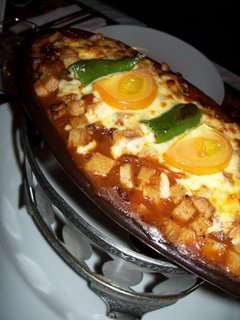 The grilled skewered lamb meatpattie from the Patlican kebab tasted full of flavour. I love the way the spices used had tasted. Emz said that she likes the vegetables in this dish. 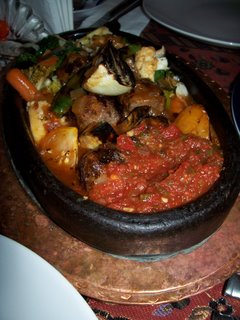 Emz seemed to be loving the spinach in the pide. I like the novelty of the dish. That was my first time eating a bread with spinach and cheese. 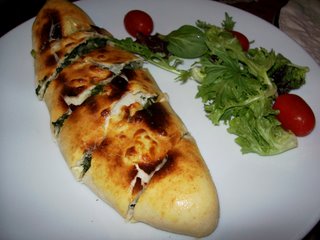 Em has been a wonderful company, and we spent quite a fair bit of the dinner catching up on each other lives.

It appeared that both of us agreed to end the meal sweet. That was why we ordered a dessert. The dessert was pretty sweet, and left a sticky feeling in the mouth after we ate it. 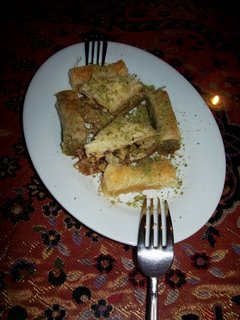 The most unexpected pleasant surprise of our dinner was that just before we foot the bill, we were treated to Turkish delights. It had a nutty texture and was sweet. While we were each given only some pieces of the Turkish delight, it helped to end our short stay at Alaturka in a memorable and pleasant way.

If all goes well, I should be visiting Alaturka again in the future if I have a craving for Turkish food. I think I would want to try more of its signature dishes the next time when I am there.

Last but not the least, before I end this post, a word of thanks to Emz for her gift, Aaron Copland's What to Listen for in Music. I believe this book would help me listen to music in a more active manner. Thanks Emz.