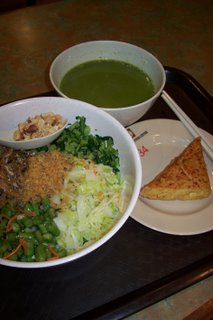 However, yesterday, I was at China Square Food Centre and tried the Thunder Tea Rice again for the second time. I found myself enjoying the plain, raw taste of the tea. In a world whereby there are too much artificially flavouring, the tea's natural and raw taste turned out to be a refreshing one after my tastebuds have accustomed themselves to the new taste. Moral of the story: If you didn't like the taste of Thunder Tea at first, try it again, you may surprise yourself.

For my blog friends, if you want a companion to try this out on a weekend, let me know.

For more information on where to find the Thunder Tea Rice, check out this website: http://www.sbestfood.com/thundertearice

Email ThisBlogThis!Share to TwitterShare to FacebookShare to Pinterest
Labels: food