Due to work commitments, I felt rather disappointed that I could not attend the Launch of International Museum Day 2007 even though I had received an invitation to attend it.

Kevin Lim of theory.isthereason makes my day with his post on the launch.

If you ask me why it took me so long to post this post, my apologies, I had been too focused with practising, work and d'Bassists' performance that I did not have much energy left to surf blogosphere and to post.

Whatever it is, do check out Kevin's post titled Meeting Minister Lee Boon Yang @ International Museum Day, and find out about Singapore Collections Online - the first virtual repository of its kind featuring close to 6,000 artefacts and artworks from National Heritage Board's collection. 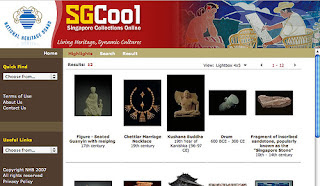 Last but not the least, I have a feeling that my friend, Emily, may wish to take a look at the internal view of the Rhino bus and Kevin's post has two such photos. So Emily, I have written this post with you in mind.
Posted by oceanskies79 at 6/03/2007 09:46:00 am