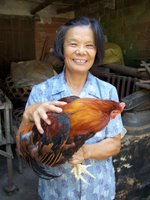 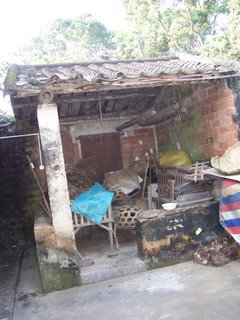 Before we left the village, I saw my first aunt taking a chicken with her from a storage area. She said that she would be taking the chicken to Haikou (a city of Hainan, about half-an-hour's ride from the village) so that she can cook chicken for one of her sons who is living there. When we reached our hotel at Haikou, my first aunt left with one of her sons (my cousin).

***
At Haikou, after checking into our hotel rooms, I took the chance to use the toilet and bathroom facilities. I felt as if I had been missing the modern, urban toilet facilities for quite a well. I could say that I am too used to some of the comforts of modern city living that it had been a challenge to adjust to village life. But I am proud that I have survived happily my three days and two nights stay at the village.

***
Later that afternoon, my parents had been obliging to accompany me to walk to a nearby post office. I had wanted to get postcards from Hainan for my friends, and I was told that it might be available at the post office. Well, I shalln't write about my postcard-hunting experience in detail here. Stay tune for this at another time. 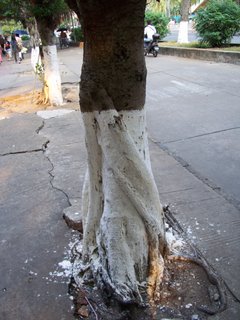 While walking about the streets of Haikou, I took a particular interest at the painted trunks of the coconut trees. For your information, most of the streets of Haikou city were lined with coconut trees by the sides of the roads. Actually, to think of it, it can be a scary idea for yours truly to walk under the coconut trees. I never would know when a coconut fruit would decide to fall and hit on me. I wonder if any car on the roads of Haikou had its windscreen accidentally hit by a falling coconut fruit?

For reasons unknown to me then, most of the lower trunks of the coconut trees (and other trees that lined the sides of the roads) had been painted white. I asked my father about why the trunks were painted white. He said it is likely a road-safety measure. When the trunks are painted white, that part of the trunks would be better able to reflect light when the cars' spotlights shine on the trunks at night. With that, cars drivers can better steer away from the trees.

***
That afternoon, we also went to a nearby photo-developing shop to develop the photos that we had taken earlier in the vilage so that we can pass the photos to my first aunt later that evening.

**
That evening, we took a taxi to my cousin's place of residence. It was a unit in one of the apartments. As there was no lift, we climbed our way up the stairs. Many steps to healthy living, I could say.

We were greeted by my cousin, and several other relatives. I heard from my parents that two of the children of my other cousins are living together with the cousin whom I met that evening. Gosh, that makes me the aunt of the two children! Actually, many of my cousins are already married with children, so I have many nieces and nephews than I can imagine.

Dinner was simple but lovely. I decide that I shall let the photo below illustrate to you how the dinner had been. We had sting-ray, chicken and many other dishes. The soup was nice. 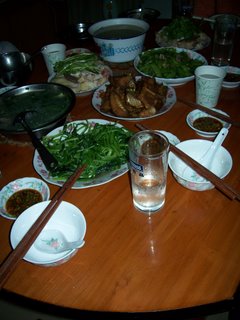 ***
After dinner, we had wanted to take some group photos. I realised that my cousin's son was quite camera-shy. Anyway, I figured that he might want to learn how to take photographs using a camera, so I taught him some basics and then asked if he could help take the group photos using my camera. It seemed that this young boy learns pretty fast. Hmm, I wonder if he may become a famous photographer one day?