Leaving the village for Haikou 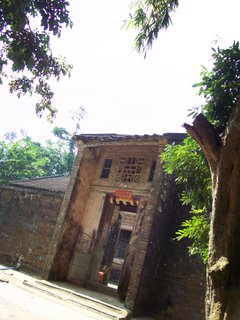 The time came for us to bid farewell to our relatives in the village. After lunch and a short family-phototaking session, my uncle helped to call for a private car to take one of my aunts, my parents and myself to the city of Haikou. Haikou is the capital of the Hainan Province. 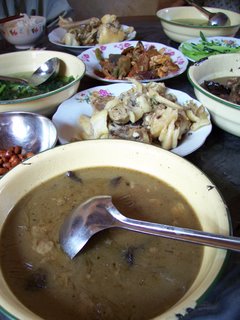 The lunch that day.

I realised that parting isn't an easy affair emotionally. While I realised that the village wasn't meant for me to live on a long-term basis, I welcomed the short respite from the city's hustle and bustle that the village had offered me. The hospitality of my relatives there has also made my trip there more enjoyable than I had imagined. While on one hand, I looked forward to leave the village, there were certain people and things in this village that I felt I did not wish to part with. Is it human nature to subject oneself to such a dilemma and contradiction?

The vehicle that was to take us to Haikou had lost its way, and it took us quite a bit of waiting before the vehicle arrived. While waiting, I could see that my paternal grandmother took the trouble to get a short stool to sit down outside the main entrance so that she could wait with us. I felt touched by her thoughtful gesture.

When the vehicle arrived, I bid farewell to the folks and headed for Haikou with my parents and one of my aunts. That aunt of mine has a son who lives and works in Haikou. She was heading for Haikou so as to visit her son, who is also my cousin.

The journey from the village to Haikou took between half-an-hour to an hour. Generally, the driver was polite, but when I realised that for one stretch of the journey, he was driving while holding to a mobile phone in one of his hands and listening to the phone, a sense of fear for my safety arose within me. I had wanted to tell him off, but I wasn't sure of the cultural practices in Hainan to know if it was acceptable to do so.

Just when I could not hold myself from reminding him, the phone conversation stopped and he was back to driving. If something like this were to happen again, I think I shall be more assertive to remind the driver to stop the car if he needs to use the phone.

By the late afternoon, we reached the hotel that one of my cousins (the son of my aunt who came with us to Haikou) had helped us to book. 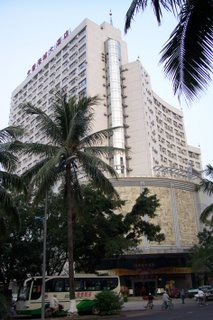 After the necessary checking-in was done, I headed for the hotel room. Below is a photo of a part of Haikou city taken from the hotel room's window. 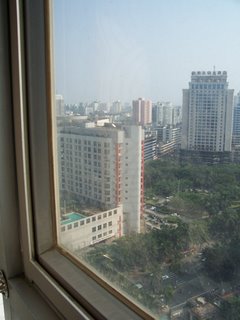 I would spend just two nights in that hotel room before I could head for home. That thought was a welcoming one. It was not that the hotel room was not up to standard, but I simply missed my back-supporting bed and my dear instrument back at home. 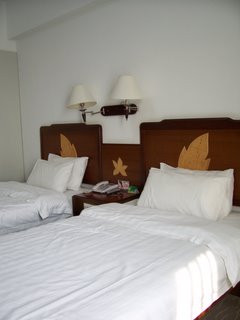 On the other hand, I suppose travelling does help make one realise how adaptable one really can be. I think that while I can adapt easily to life in the city and the sub-urb, it does take me quite a bit of effort to adapt to living in the rural areas.
Posted by oceanskies79 at 1/01/2007 08:29:00 am