I woke up fairly early in the morning at 12 Nov 2006, and after changing my clothes, I left the hotel for a stroll with my dad. 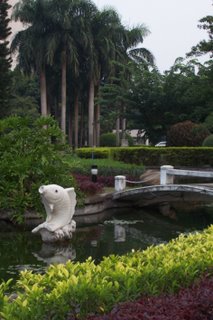 We found our way to a nearby park and we took some time strolling at the park. While strolling, I started to miss the fresh air of the village. Actually, I think the air of Aberdeen was even more fresh. Pardon me, I am missing the days that I had spent visiting Scotland.

**
Later that morning, my cousin, his wife and my first aunt met myself and my parents for breakfast. We had breakfast at a restaurant serving Chinese dim-sum.

In China, according to my cousin, there is a common practice to wash the chopsticks and the tea-cups with tea before one starts having the meal. I remember that when I was in Shenzhen about four years ago, I have also observed people in Shenzhen washing their chopsticks and tea-cups before having their meal. Right in Singapore, we do not have such practices. I think it can be quite a hazzle for me if I were to put aside time to wash chopsticks and cups before having my meal.

Whatever it is, I am pleased to show my readers photographs of this common practice. My cousin agreed to allow me to take photographs of him washing the chopsticks and the tea-cups. 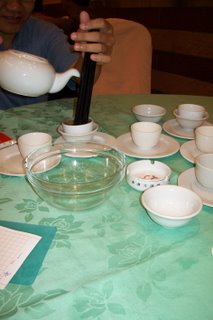 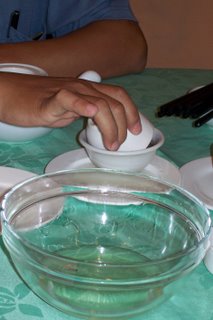 **
One of the items that we had asked for our breakfast was the porridge. It was plain porridge, but the porridge had a most delicious and pleasantly savouring taste to it. The texture was also quite special. I hadn't tasted any porridge like that before. I asked my relatives what could have made the porridge taste so special, and I was told that corn flour (shu2 fen3) is usually added to the porridge. In addition, the porridge is usually being cooked with a kind of beancurd food material to add that special taste (although the beancurd material is usually removed from the porridge after the cooking). 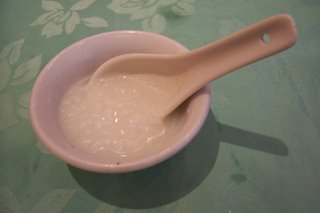 We also ordered several other dishes. For some of the dishes, we had to go to a nearby counter to choose the item for ourselves. Subsequently, the staff would indicate on a ordering list the items that we had taken.

I am not an avid lover of dim-sum but I quite enjoy having breakfast together with my parents and relatives. My first aunt seemed quite amused at how I kept taking photographs of seemingly common everyday life. 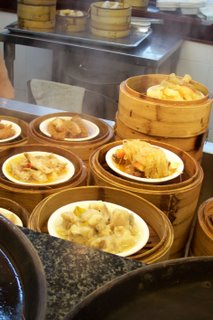 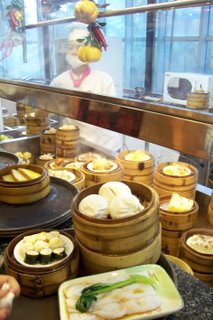 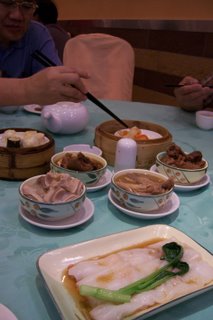 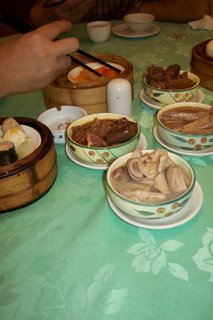 My cousin treated us to the breakfast, though he shouldn't have.

After the breakfast, my cousin remembered that I greatly hope to get postcards from Hainan for my friends. So after the breakfast, he asked me to hop onto his scooter, and we headed for the biggest post-office in Haikou. More about my postcard hunting experiences later. Stay tuned.
Posted by oceanskies79 at 1/13/2007 10:31:00 am

The hygiene in China is still lacking, so it is better to wash or clean all crockery before eating.

Hi Eastcoastlife, would you like one of the postcards? I can pass you one of those I have got for myself.

hi PY! just keeping my word to Simple American and dropping by to say hello. I'm a big fan of dimsum, especially harkau, so that's why this post caught my eye... heheh! cheers to ya!

Hi May. Thank you for visiting.

Thanks PY!
Only if you have extra. I think I would be going to Hainan Island in the near future, dunno when, hubby and his parents are still discussing.

Eastcoastlife: Sure. I will send you some of the postcards.

My apologies. I have misplaced your email and contact number most likely. Could you please email me your mailing address. My email address can be found under my blogger's profile. Thanks.

Otherwise, I can meet you where you would like over one of the weekends, if I have time spare from practising and walking around places. Na, can make time for you.