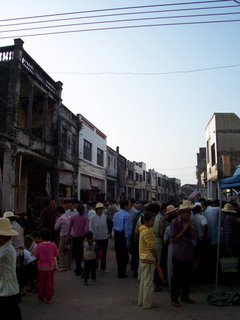 Not willing to give up, I decided to check out the book-stores in the town of Tan-niu. In Mandarin, postcards are called "ming2xin4pian4". When I spoke in Mandarin, and asked for postcards at many of the stores, all of the shop attendants had mistaken that I had asked for "ming2xing1 ka3pian4" (cards containing images of the pop-stars), even though I had clearly pronounced what I had wanted correctly. As such, when they showed me what they had thought I had wanted, I didn't know if I should be disappointed or if I should be amused.

On 11 Nov 2006, when I reached Haikou, one of the first things that I had asked my cousin was "Where could I find postcards?". He said I could try the post-office. I asked the hotel staff for directions to the nearby post-office. It was about ten minutes walk from the hotel. However, when I was at the post-office, I was told by the staff that postcards are usually not available in Hainan. The reason is that Hainan is not considered a tourist attraction province. If I should want postcards, I would have to go to the city of Guangzhou. Well, I thought to myself, how likely would I be able to find postcards containing images of Hainan in Guangzhou?

Along the way back to the hotel, I also checked out a few of the nearby hotels. However, I realised that most of these hotels were hotels meant to cater to visitors from other provinces of China, and none of them has any shop that sells postcards. I also checked out the various stores nearby the hotel, and strangely, the folks in Haikou also tend to make the mistake thinking that I was looking for "ming2xing1 ka3pian4" (cards containing images of the pop-stars). My goodness. Are those pop-stars such big favourites in China as compared to postcards containing scenes of Hainan?

Lady Luck must be shining on me on 12 Nov 2006. After the breakfast that day with my parents, my first aunt, my cousin and his wife, my cousin beckoned me to hop onto his scooter. Before I did that, he asked that I wear a helmet. My cousin told me that he shall take me to the largest post-office in Haikou to try to see if I could find postcards there.

That was my second time in my life pillion-riding. My first was at least four years ago when I went for one of my friends' housewarming event, and one of her husband's friends gave me a ride home during the wee hours of the day.

Now, back to my second experience to ride pillion. It was quite different from my first. I was riding on my cousin's scooters and travelling on very busy Sunday morning traffic in the city of Haikou. I had to muster enough trust that those cars and buses that travelled alongside my cousin's scooters won't crash onto me like I had imagined. Along the way, my cousin spoke to me and pointed to me where he works.

I went into the post-office expecting to find postcards being sold individually. However, I realised that postcards in that post-office was sold in sets. I made my selection, and also purchased stamps. I decided that I shall write on the postcards later the day when I return to the hotel. I also bought extra postcards, just in case. I figured that it was definitely much more easier to find a mail-box to post my postcards than to find postcards in Hainan.

When my cousin and I returned to his scooter, we met a lady requesting for money. My cousin told me that the fees were similar to parking fees. The lady's duty was to attend to the scooters in the vicinity. It seemed like her role is like that of a carpark attendant?

Whatever it is, you could definitely see a broad smile on my face that day. I finally got my rare postcards from Hainan. Special thanks to my cousin.
Posted by oceanskies79 at 1/13/2007 09:39:00 pm