The beautiful West Lake of Hangzhou 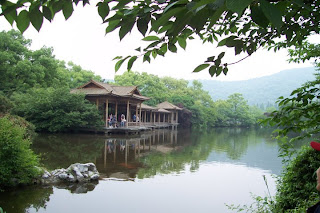 "Viewing Fish at Flora Harbour".
This place has one of the ten most beautiful views at West Lake, Hangzhou.

Among the various places that I had visited in my recent trip to China, Hangzhou left the most positive impression in my mind. First, the air in Hangzhou (at least the places that I had visited) is fresh. Second, the people there appears to have an unhurried pace of life. This is especially helpful in reminding me to slow down to appreciate the finer things in life. Third, there are some very beautiful places in Hangzhou. One of these beautiful places is the West Lake (Xi Hu) of Hangzhou.

Please take note that my simple automatic digital camera may not do justice to the beauty of West Lake. Until sponsorship can be secured to use a more advanced camera, I ask you to use your imagination to feel the refreshing fresh air of Hangzhou and the leisure way of life of the common people. 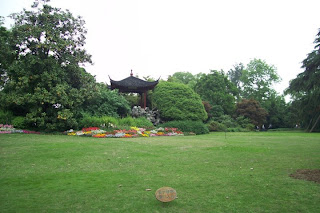 Around the West Lake, there are lush green areas like the one you see in the above photograph. I felt a sense of tranquility as I walked about. 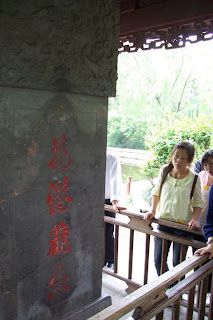 Above photograph: The four characters inscribed on the stone means "Viewing Fish at Flora Harbour". It was inscribed by Emperor Kangxi. Our tour guide pointed out to us that the last character "Fish" was deliberately written with one missing stroke. 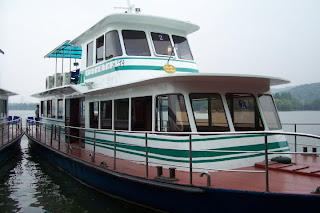 Our tour group took a ferry and had a cruise of the West Lake. It was a leisure cruise. West Lake appears generally misty. It appears to be surrounded by hills. I was told that West Lake is a man-made lake. 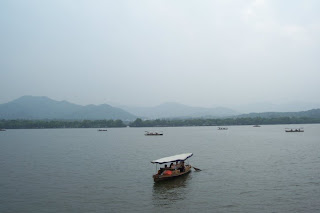 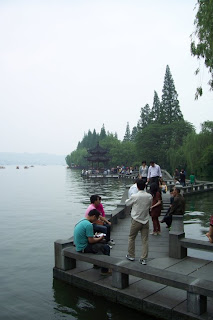 Above photograph: Long Bridge. This bridge was rebuilt in the year 2002. A plaque nearby this bridge states: "According to historical records, during the Song dynasty, there was a three-arch spanning a broad outlet out of Qian Lake Gate. The view was spectacular as the bridge was 500 metres long, which gained it the name of Long Bridge."

Our tour group was told that in the Long Bridge was one of the landmarks that was being mentioned of in the legendary story of the Butterfly Lovers. The lovers, Liang Shanbo and Zhu Yingtao, had walked along and parted with each other several times at the Long Bridge. 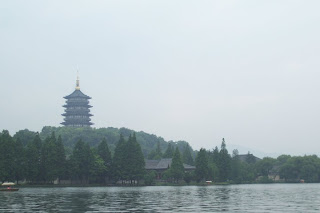 Above photograph: Leifeng Pagoda. According to legend, Leifeng Pagoda is associated with the legendary Chinese folk story of Lady White Snake. However, we learnt that this structure that we see in the photograph was built less than a decade ago. The original Leifeng Pagoda was said to have collapsed.

Overall, I think among the various places that I had visited in my recent trip to China, Hangzhou is by far the best place to visit to relax and to enjoy beautiful sceneries. There is a good policy in Hangzhou to restrict the buildings of industrial and residential estates in certain designated area. In addition, there are policies for vehicles entering certain parts of Hangzhou (e.g. places near West Lake) to be fitted with engines that emit less harmful gases. Alright, enough of my bias reviews, I just prefer Hangzhou to Shanghai.
Posted by oceanskies79 at 6/28/2010 08:11:00 pm

I think the pictures are well taken, so need not secure sponsorship but I like the way you put it across. :)

Pinkie: Thank you for your compliments. :)