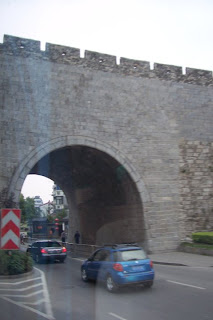 The walls of Nanjing.

My recent visit to China in mid May brought me to visit various parts of China. One of the places that the tour group brought us to visit was Nanjing. Nanjing came across to me as a place to visit if one were to learn more about history.

The Chinese name of Nanjing, 南京, I learnt means "Southern capital". Nanjing is currently the capital of China's Jiangsu Province. It has also served as the capital of China during several periods in history, for example, during the short-lived Southern Tang Kingdom (937 – 975 CE) and during (1368 - 1421 CE) parts of the Ming dynasty. I also found out from wikipedia that Nanjing was the capital of the Republic of China before the Chinese Civil War in 1949.

On our way to Nanjing, our dedicated tour-guide gave us an introduction to the history of Nanjing. Nanjing is known as Jinling 金陵 in the ancient times. Literally, the word "Jinling" meant "Golden Tomb". I was told that one of the Kings had been advised that in order to suppress the emergence of another ruler who would emerge from Nanjing, the King had to bury golden statues of a boy and a girl in a selected location in Nanjing.

We were also told that the forbidden city in Beijing was modelled after the imperial city that the first Ming emperor, Emperor Zhu Yuanzhang, had built in Nanjing. I would have like to have a closer view of City Wall of Nanjing that was designed by Emperor Zhu Yuanzhang, and my closest encounter with the ancient city wall was a glance of it from my seat on the tour-bus. 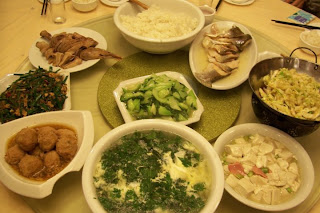 When it was time to have our lunch, we were served the famous Nanjing salted duck. Somehow, it seems that Nanjing was well-known for its various form of duck meals, from boiled salted duck, roasted duck, braised duck to duck blood and more. I was told that the ducks that were used to prepared Peking Duck had originated in Nanjing. So it seems that the origin of certain dishes in Beijing could be traced back to Nanjing.

After lunch, we visited the Xuanwu Lake, one of the three most famous lakes in Nanjing. With quite a pretty limited time at the area and the dull skies, I did not manage to get to experience the full beauty of the Xuanwu Lake. Nevertheless, with some imagination, one could imagine colourful mountains surrounding the tranquil waters of Xuanwu Lake. 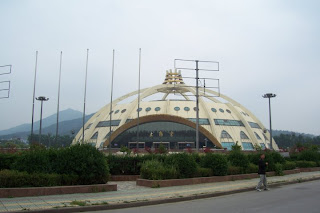 On 13 December 1937, the Japanese army occupied Nanjing. During the first six to eight weeks of the occupation, the Japanese army committed numerous atrocities. The Chinese government estimated that 300,000 civilians and unarmed Chinese soldiers were brutally slaughtered during this period of the occupation. The Nanjing Massacre Memorial Hall possibly serves as a poignant reminder that in no way should such war atrocities be allowed to happen in the future.

My mood felt melancholic while I was visiting the Nanjing Massacre Memorial Hall. Does the thrist for power and control make a group of army lost their sense of humanity? 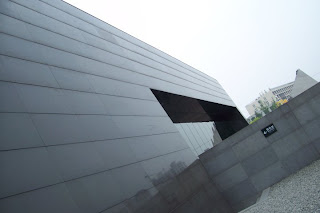 I know the feeling you explained... the sense of solemn thought and melancholy. It is also in war memorials that I've been to. Loss of life, which is so precious, is always atrocious.

I always think that the people who were killed were once innocent infants. Humans can be so cruel.

On a less serious note, what was the duck like? I've never had it... is it greasy or is it just like another dark poultry meat?

Dear Jammie, I suppose we can learn to remember that life is too precious, and we need to value it.

The duck is cold. Think about it as a preserved cold salted duck. The duck has went through some level of dehydration due to the process of treating it with salted cold water, so the flesh isn't that fleshy. Yet, quite a nice cold dish to have if one doesn't mind it a bit salty.