A bit more of Nanjing After a solemn visit to the Nanjing Massacre Memorial Hall, the bus led the tour group to a place that specialises in jade. It was rather educational to learn how to differentiate between a real jade and a fake one. One way to do so is to rub the jade against the surface of glass. I also learnt that wearing a jade bangle over one's left wrist can have a calming effect on one's nerves and even help to massage a particular accupoint of the body.

The jade establishment was very hospitable to treat the entire tour group to dinner. My friend who was onboard the same tour group loved it when the waiter brought a serving of chilli upon her request. It seemed that my friend has been missing the taste of spicy food for a while. 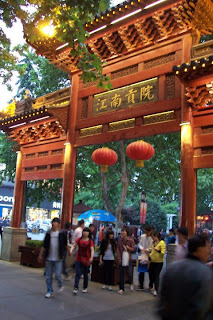 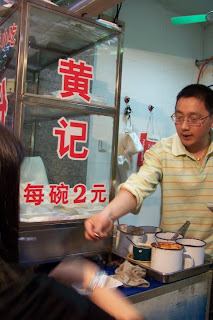 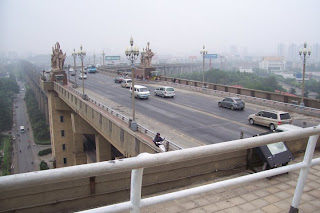 In many ways, the Nanjing Yangtze River Bridge is a symbol of the Chinese national pride and indomitable spirit. I heard from the local guide that because this is a toll-free bridge, there is usually a high volume of traffic using this very bridge. To preserve this bridge of historical significance for generations to come, a fair bit of money has to be spent every year for the bridge's maintenance. The maintenance actually costs way more than building a new bridge. However, I think it is great foresight to preserve this special bridge to remind generations to come of the indomitable spirit of those who have made sacrifices to build this very bridge.

If you were to ask me, my favourite spots in Nanjing in the trip would be the Nanjing Massacre Memorial Hall and the Nanjing Yangtze River Bridge. Simply because they not only tell a story about the past, they tell stories of countless people who have made sacrifices in their very own ways.