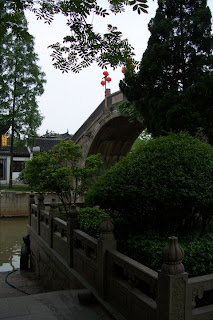 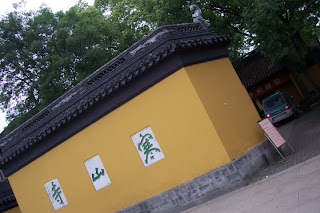 One of our tour group's stops at Suzhou was Hanshan Temple. I have read about this temple more than a decade ago when I was a teenager studying Chinese literature. Zhang Ji, a poet from Tang dynasty, had described a melancholic scene of a dispirited traveller. In this poem, the bells of Hanshan Temple was mentioned. So while I was visiting Hanshan Temple for the very first time in my life, I felt it was familiar to me in its very own ways. 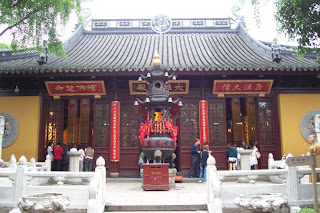 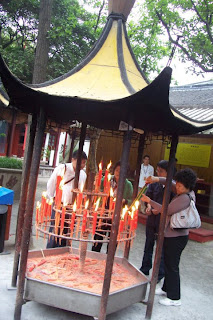 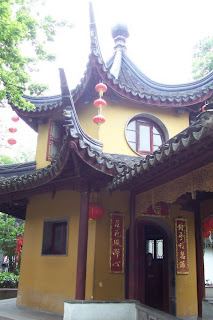 The Bell Tower of Hanshan Temple.

I have also learnt that before Suzhou was industrialised, many of the people had lived beside canals. Canals are common in Suzhou. These canals had been dugged thousand of years ago so as to redirect the waters from the floods that had been common back then. With plenty of water and fertile soil, crops generally grow well in Suzhou. In some ways, as canals are common in Suzhou, Suzhou has been given a nickname by some as the "Venice of the East".

Our tour group stopped by to catch a glimpse of one of the historic canals. Living beside a canal can in some ways pace a person to live less hurriedly since the water in the canal often flows at a fairly moderate speed. Most of the houses beside the historic canals in Suzhou do not have modern sanitary facilities. I was told that most of the occupants are either elderlys (who have lived in these houses for years) or new immigrants from other parts of China. While there may not be modern sanitary facilities, the unhurried pace of life may lend the dwellers a poetic lifestyle beside the waters. 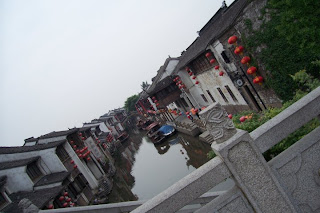 Admittedly, I was feeling rather tired from the day. The tour group was treated to dinner. The vegetables were my favourite since I am a vegetable lover. By the way, I learnt that in China, a bottle of beer is way cheaper than a bottle of soft drink. Anyway, that did not seem to both me since I prefer to drink water. 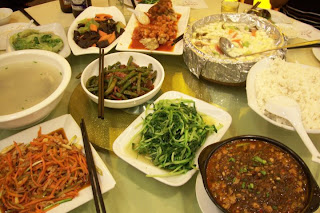 The next morning, we visited the Silk Research Institued Shopping Center of Jiangsu Province. Here, we were given an introduction to how silk was produced and processed. I was interested to learn more about the processes involved and I found the introduction too brief. Whatever it is, at the very least, I am thankful to have caught a glimpse of how silk was produced and processed. I was told that the mulberry trees grow well in Suzhou. Mulberry leaves are the main diet of the mulberry silkworm. Such silkworms produced what is considered the best-known type of silk.

Suzhou is not just well-known for its mulberry trees and silk, it is also a land with fertile soil suitable for growing crops. In addition, I was told that many farmers in Suzhou rear fishes.

Before I get too poetic, the tour bus as a matter of fact got me on the roads again. This time, the tour group were led to Nanjing.