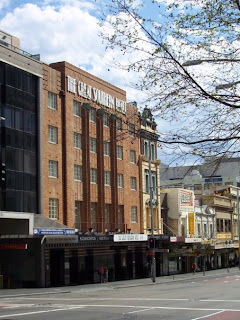 During my memorable stay in Sydney, I was staying in The Great Southern Hotel located along George Street. One thing I particularly like about the hotel was what I call as the air-wells. I realised that I have a liking for buildings with air-well. They somehow perform a useful function of bringing in light and air into the inner parts of the building. Such a function somehow makes air-well a fascinating feature to me. As such, I think I have had developed a rather peculiar interest to take photos of the air-well of the hotel on different days of my stay there. 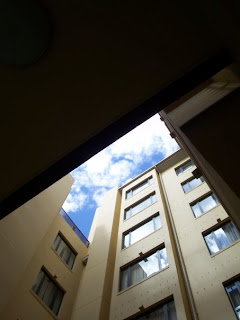 In the late morning, I have the great pleasure to meet up with RL. Interestingly, I realised that RL and myself attended the same secondary school, the same junior college and were both previously students of the Arts & Social Science Faculty of the same university. I probably got to know her better during the university years though I had known of her existence before that.

RL is a very kind friend. I still remember that many years ago, I was struggling to adjust to the university life when I was in Year One, and she was one of the kind souls on the university campus who would lend a word of concern and gestures of kindness whenever I met her by chance. Those seemingly simple gestures brightened things up for me and had made the transition so much more bearable. Perhaps it is hard to realise how such seemingly simple gestures could make a difference to one's day, yet they did. I suppose one cannot underestimate the power of a smile, a word of concern and a simple 'hello'. Thanks RL.

Back to my meeting with RL. She very graciously agreed to meet me at the hotel lobby. That helped a lot for yours truly for I had yet to find my bearings about Sydney on 13 Sep 2008.

We had a lovely adventure together that day. That was to stroll from one end of George Street to the other until we reach Circular Quay. It was a lovely stroll. I learnt that the location of the hotel is a very centralised one. I could get conveniently to most parts of Sydney simply because one of the major railway stations (i.e. Central Station) in Sydney was just less than five minutes walk away from the hotel.

While strolling along George Street, RL and I caught up with each other on various aspects of our life. We had learnt earlier via Facebook that both of us have the MBTI profile of people with preferences for 'Introverted Intuition with Extraverted Feeling' (INFJ), and the awareness of it somehow seemed to enable us to connect with each other at a deeper level.

Along the way, RL very thoughtful pointed out to me some of the major structures and buildings in the city of Sydney. Below is a picture with the Sydney Tower in it. Sydney Tower is Sydney's tallest free-standing structure. 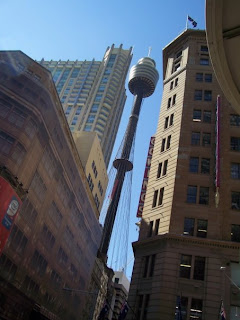 Once we were near the other end of George Street, we could see the Sydney Harbour Bridge. It's a magnificent structure. 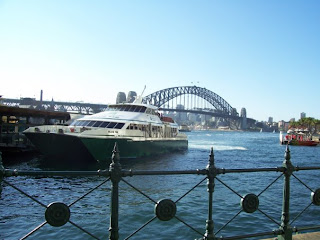 I was very lucky. When I reached one of the wharves at Circular Quay which was near one of the ends of George Street, RL graciously bought for me a ferry ticket to Manly. Manly is a popular seaside destination in Sydney. The weather for the day was ideal fora trip to Manly. It was a sunny day. More interesting adventure awaited us.
Posted by oceanskies79 at 9/25/2008 10:43:00 pm

Sydney Harbour Bridge is magnificent! .... and the harbour view is beautiful! That was a lovely walk you had.

So nice to have a friend in a strange country to bring you around.

eastcoastlife: It is. I am thankful for good friends. :)