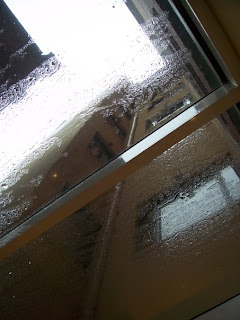 I woke up on 14 Sep 2008 morning to realise that it was raining. It was quite a heavy rain. I asked for good weather later the day. On my way to the hotel's cafe for breakfast, the view from the glass ceiling of the hotel's lobby intrigued me such that I took the photo found above. Admittedly, I have a liking for air-wells as mentioned in one of my earlier posts.

During breakfast, I spent some time looking through the photos I had taken in Sydney, including those taken during the lovely Korean dinner the evening before. In comparison, the Aussie-style breakfast that I had at the hotel was simply too plain. Anyway, I was thankful that I had food to eat for breakfast. Afterall, I'm probably one of the lucky folks who could have privilege to have three meals a day.

The adventurous streak in me decided to set off from the hotel to explore Sydney's Chinatown and Darling Harbour. I made sure that I carried an umbrella with me, and armed with a wind-breaker, I was ready to set off.

It was quite early in the morning, barely just around 9 a.m. When I was somewhere near Goulburn Street, I could hear from a distance, someone playing an erhu. I was basically walking about without any aim in mind. I ended up at one of the entrances of Sydney's Chinatown area. Chinatown was very quiet at that time of the day. Furthermore, it was raining. 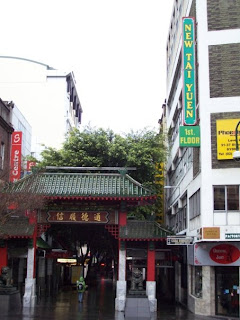 Once I was in Chinatown, the sound of the erhu became closer. I realised there was an erhu player basking somewhere near Dixon Street. The erhu player tried to play ''double stops'' on the erhu, and he played pretty well. I felt a sense of nostalgia and being at home when I heard the sounds of erhu playing Chinese music in a foreign land. As most baskers would probably appreciate, I gave him some tokens of appreciation for his good playing. 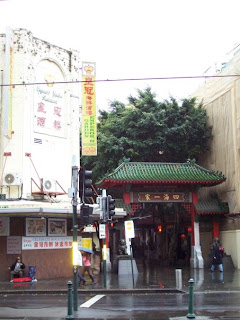 Notice the erhu player on the left of the photo. 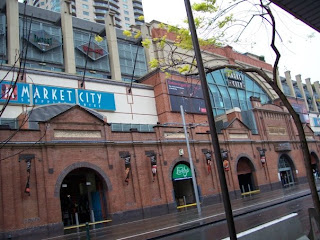 The rainy became lighter gradually, and I headed for Darling Harbour. The pleasant surprise of the morning was that I saw a lot of seagulls, near the Haymarket Paddy's Market. It was quite a challenge to take photos of them while they were flying, so I have taken a photo of them at rest. 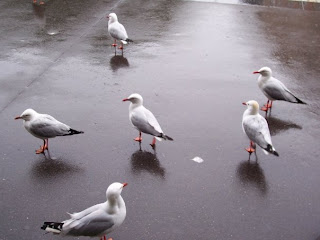