Pause: 1 minute before the show

Last Thursday, we had double bass section's dinner at Spageddies Italian Kitchen. Thank goodness that it was the music school's school holidays last Thursday, and I did not have music theory class and could be present for the dinner. It was good company and good food.

Our orchestra's double bass tutor was present for the dinner. He shared his insights on various topics, one of which was on the designs on certain public facilities in Singapore.

His comments led me to think of the scene that you see below. I took this photograph a month ago. If I am not wrong, it was just 1 minute before the start of the opera Marriage of Figaro. 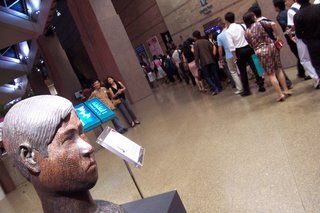 Strange sighting. One minute before the show starts, and a long queue!

I wasn't at the Esplanade - Theatres on the Bay that day to catch the Marriage of Figaro. In fact, I had felt thankful when I saw the long queue that I had enough foresight to enter the Theatre at least 15 minutes before the start of the opera when I had caught the same opera a few days before.

Not forgetting to mention, the Esplanade Theatre has fairly strict security measures and every member of the audience must have his baggage checked before he could enter. So those at the back of the queue would likely be late for the show.

The consoling thing was that the queue had cleared much faster than I had foreseen. Thanks to the professionalism of the usherers and staff members of the Esplanade. They do take a lot of pride in their work.

It seems that the calculations for the Esplanade Theatre and Concert Hall could have been made with the assumption that all the 1600 to 1900 members of the audience will spread themselves out and come at different intervals over a period of about half-an-hour. Bear in mind that it was never designed to allow all 1600 to 1900 members of the audience to enter and exit the halls at the very same time.

But in reality, the observation is that most people may come at about 10 minutes before the start of the show. In some scenarios, as you would have seen on the photo above, people rush in 1 minute before the show, thinking that they are on time. However, the venue is not made to cater to such an influx of audiences at the last minute, it seems. That is probably why we can find signages at the Esplanade that encourages audience to enter the halls 20 minutes before the start of the show.